2010: Summary of the World's Health questions

The World Health Organization has issued a report on the main health issues facing the world in 2010. Along with the serious challenges facing mankind, and the natural disasters which affected Haiti and Pakistan, there is also some good news, namely progress towards the Millennium Development Goals. 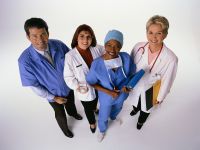 First, the good news, and there is plenty of it. The A H1N1 virus had run its course by August 2010 and ceased to be a pandemic strain of flu, although the WHO expects it to perform as a seasonal influenza for the next few years. The second piece of good news is that Avian flu (A H5N1) has still not managed to make the species jump from birds to pigs or humans.

The World Health Organization mentions a number of positive developments in its survey of the year 2010, namely progress towards achieving the Millennium Development Goals, the strengthening of health financing to make healthcare more accessible, principally in developing countries, the success in the fight against tropical diseases, also against poliomyelitis in Africa and the development of a new vaccine against meningococcal A disease, which places 450 million people at risk in this continent.

Among the good news is the fact that since 1990, the deaths of young children have decreased by one third, the number of women dying during pregnancy and childbirth has decreased by 34%. On the financial front, the 2010 World Health Report provides governments with guidelines on how to finance healthcare systems, widening the network to cover more people.

The WHO also claims to have had success against tropical diseases, understanding better the conditions in which they propagate and thrive. In August, 15 countries in Africa launched a synchronized poliomyelitis vaccination programme, reaching 72 million children and finally, a new vaccine has been developed by the Meningitis Vaccine Project against meningococcal A disease, which affects up to 450 million people across Africa.

The main challenges were posed by the natural disasters in Haiti (massive earthquake and later a cholera epidemic) and by the devastating floods in Pakistan. The Haiti quake on January 12 affected 3 million people, destroying 250,000 homes, 30,000 commercial buildings, killing 230,000 people, injuring a further 300,000 and leaving 1 million homeless. The cholera outbreak after the summer killed around 2,000 people and left nearly 100,000 sick, the epidemic spreading to all areas of the country, including across the border to the Dominican Republic.

In Pakistan, around 20 million people were directly affected by the July monsoon floods, leaving one-fifth of the country under water, destroying infrastructures and agriculture, killing around 2,000 people. UN Secretary-General Ban Ki-Moon declared that it was the worst flooding he had seen. Ensuing problems involved with the consumption of unsafe drinking water affected up to ten million people.

Apart from these natural disasters, record levels of multi-resistant Tuberculosis were registered. In some areas, up to 25% of the population are infected with this strain of the bacillus, a strain which no longer reacts to standard drug therapy. Another serious health problem which appears on a worldwide scale is abuse of alcohol, which claims the lives of 320,000 young people every year, among a wider universe of 2.5 million victims.

While there are constant challenges, these days the good news outweighs the bad, while the international response to natural catastrophes improves, albeit at a pace far slower than when there is a conflict.