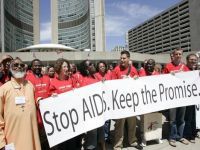 World AIDS Day 2010 on December 1 is going to concentrate on human rights and universal access to treatment, as the Millennium Development Goals milestone looms five years off. Lights for Rights events are to be held in 100 cities around the world, focusing on the devastating effect AIDS has had.

In the event, organized by amfAR, the Foundation for AIDS Research, UNAIDS, the World AIDS Campaign and Broadway Cares/Equity Fights AIDS, the lights shining on monuments in 100 cities will dim, highlighting the plight of those with AIDS, and then will be turned up to full strength, symbolising the illumination of fundamental rights for all, rights often denied to people living with HIV/AIDS.

The theme for this World AIDS Day is Universal Access and Human Rights, the key slogans being: I am accepted; I am safe; I am getting treatment; I am well; I am living my rights; Everyone deserves to live their rights; Right to Live; Right to Health; Access for all to HIV prevention, treatment, care and support.

World AIDS Day originated at the World Summit of Ministers of Health on Programmes for AIDS Prevention in 1988. However it had first been conceived in August 1987 by two public information officers for the Global Programme on AIDS at the WHO office in Geneva. The Director of the Programme took the idea to the Summit and December 1 was chosen, being in the middle of a gap in the news calendar, between the US election that year and Christmas.

The aim of the Day is to:

Build current momentum around the issue of human rights;

Take advantage of the theme of human rights as a comprehensive approach that ties directly to universal access;

Pull together many issues including the right to information, right to treatment, non- discrimination as well as the right to health

Use internationally agreed conventions and definitions of human rights as a solid advocacy base, particularly in interacting with governments.

There are several dangers, among them the world economic crisis which has governments scaling back public spending, affecting healthcare programmes which could in turn be dangerous for people living with HIV/AIDS. The UNO wishes to make progress this year on the Millennium Development Goals pledge to halt and reverse the spread of HIV/AIDS by 2015.

In many countries, social stigma surrounding the disease and even discrimination and criminalization drive people underground, where they do not have ready access to life-saving information, testing or treatment. As Ban Ki-Moon points out, in the countries where human rights have been promoted to protect those with HIV/AIDS, there have been fewer infections reported, less demand for treatment and fewer deaths.