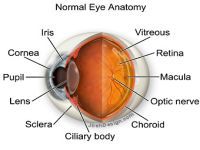 The food of the Brazilian is all wrong. Only 17% of the population consume the 400 grams recommended by WHO (World Health Organization) of fruits, vegetables and greens, as surveyed by the Ministry of Health. Outcome: no magnesium in our diet that protects the eyes and carries out more 300 vital metabolic functions.

Just to give you an idea, a recent study published in the British Medical Journal shows that eating an extra portion and a half of green vegetables, an important source of magnesium, reduces by 14% the risk of contracting diabetes. A meta-analysis at the Institute of Metabolic Science in Cambridge (UK) shows that a diet rich in magnesium lowers blood pressure and the level of glucose in the blood. Therefore, it may deter the development of diabetic retinopathy, a major cause of blindness.

According to the Institute ophthalmologists, Penido Burnier and Leoncio Queiroz Neto, the disease affects 75% of the 10 million Brazilians who are diabetic and in most cases leads to loss of vision. Although studies are not conclusive, the expert claims that the nutrient is essential for eye health. For example, he says, it acts as a blocker of calcium deposits on the inner walls of arteries. "These deposits cause the formation of neovessels that hinder the nutrition of the retina and leads to the death of its cells, the main characteristic of diabetic retinopathy" he explains. In addition to preventing calcification of arteries and vessels, he highlights, magnesium hinders the production of a potent vasoconstrictor, endothelin-1. So, those who have a diet low in magnesium are more likely to contract hypertension and primary open-angle glaucoma, due to the lower blood flow to the head of the optic nerve.

The problems of nutritional deficiency do not stop there. The expert says that magnesium helps the absorption of vitamins E, C and B, essential nutrients for the health of the ocular tissues and other organs. It also protects against oxidative stress that can cause early cataracts, serious skin aging and the symptoms of PMS (premenstrual tension) among women, he says.

Signs of Deficiency and Sources

The main signs of magnesium deficit are listed by the physician:

· Tremor in hands or eyelids

· Cramping and involuntary movements in the face

· Loss of appetite, nausea or vomiting.

He says these discomforts do not appear simultaneously and may still be associated with other health concerms. Adopting supplementation on your own, should not even be considered. Queiroz Neto explains that the absorption of magnesium and calcium are compete. Therefore, consumption must be combined. Moreover, supplementation requires medical supervision because excess can cause drops in blood pressure, changes in bone calcification and respiratory problems.

The main sources of magnesium are: leafy greens, seafood, nuts and whole grains.

Diabetic retinopathy is seen only in its advanced stages

There are no symptoms in its early stages. Diabetic retinopathy is the death of retinal cells, an ocular membrane eye where images are processed. The specialist says that half of the patients seeking their first consultation already have their visual acuity significantly compromised. The problem, he says, is that you cannot recover lost vision. To stop the evolution, it can be treated with laser applications for drying neovascularization, administration of anti-inflammatory drugs or surgery in more advanced cases.

Half of the glaucomatous lose vision in one eye

The glaucoma is also asymptomatic. This makes the those affected have similar behavior to that of patients affected by diabetic retinopathy.

A disease characterized by loss of visual field is the second leading cause of blindness worldwide. The doctor says that the difficulty occurs when the outflow of aqueous humor, the fluid that fills the eyeball, causes the death of cells in the retina and optic nerve head. "It is common in glaucomatous to make their first visit after having lost sight in one eye or half of the axioms of the optic nerve that are unrecoverable" he says. Treatment is done with eyedrops, laser applications and, ultimately, surgery.

Cataracts can be associated with habits

Cataracts, the largest cause of treatable blindness, is the clouding of the lens, the natural lens of the eye responsible for focusing images on the retina. It is generally associated with aging. According to him, it may occur early due to nutritional deficiency, excessive sun exposure or trauma. To eliminate the disease, the only treatment is surgery that replaces the cloudy lens by an intraocular lens. Surgery is more advanced in recent years. So much so that it now allows a person over 60 years of age to see the same as another who is 20 years old. The increase of glucose into the blood in patients with diabetes makes the eyes become more vulnerable. To preserve vision, an ophthalmologist should be consulted annually or whenever a change of any type is perceived.