First the earthquake, then a hurricane and now, cholera. Over 800 people have died and 12,000 have been hospitalised in this latest scourge to hit this Caribbean island. While financing to meet urgent needs caused by January's earthquake continues to lag behind the requirements, the UN launches an urgent appeal for funds to halt the epidemic. 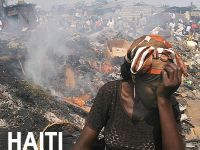 The massive earthquake on January 12 destroyed vast swathes of Haiti, razing infrastructure and taking 230,000 lives, injuring another 300,000, leaving 1.3 million homeless. These people then had to endure hurricane Tomas, which took a further seven lives leaving widespread flooding, perfect for the propagation of the cholera epidemic which had already begun and which has now killed over 800 people, leaving a further 12,000 in hospital.

This is a nightmare scenario which has created a desperate situation. The United Nations Organization has launched an urgent campaign for 164 million USD to provide urgently-needed equipment to stem the spread of the epidemic. The money will help pay for additional doctors, nurses and water purification equipment.

The epidemic is expected to affect over 200,000 people in the coming 12 months, according to the UN Office for the Coordination of Humanitarian Affairs, whose Coordinator in Haiti, Nigel Fisher, claims "the sheer quantity of relief items that need to be delivered in the days and weeks ahead is going to require more logistical and financial support for the Government by all humanitarian agencies and donors".

Five out of Haiti's ten administrative regions have been affected by the deadly disease and Nigel Fisher warns that without the urgent help his office needs, the outbreak could outrun the aid agencies.

The UN is currently targeting areas most at risk from the epidemic and has to date distributed half a million water tablets, soap and oral rehydration units. There are 15 cholera treatment centres operating in the country, seven of these in the capital, Port-au-Prince.

"Cholera is an acute intestinal infection caused by ingestion of food or water contaminated with the bacterium Vibrio cholerae. It has a short incubation period, from less than one day to five days, and produces an enterotoxin that causes a copious, painless, watery diarrhoea that can quickly lead to severe dehydration and death if treatment is not promptly given. Vomiting also occurs in most patients." (WHO)