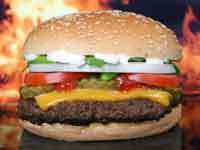 The Komsomolskaya Pravda newspaper decided to conduct a curious experiment with the products purchased at Moscow's fast food restaurants. A group of journalists wanted to see in practice if burgers and hot dogs spoil as fast as healthy food when kept out of fridge. As it turned out on the tenth day of the experiment, the purchased products did not change outwardly at all. Their nutritive properties have apparently worsened because even a rat refused to eat them.

The journalists were inspired with the work of US photographer form New York Sally Davis. She took pictures of McDonald's Happy Meal every day for six months in the endeavor to see the food changing on every picture from good to bad. However, neither the hamburger, nor French fries got covered with mould. They looked almost the same as the freshly purchased products and did not decompose at all in 180 days.

On October 18th, the journalists bought the following products: a baked potato with salad filling from Kroshka-Kartoshka, a McDonald's hamburger, Rostik's KFC chicken wings and a Stardogs hot dog. They put all the food in the office kitchen and installed a video camera there to observe the decomposition process online. They put a home-made all natural sandwich near to see the difference.

The products from fast food chains did not change a bit during ten days of the experiment. The home-made sandwich got covered with mould quickly. The fresh-looking products were offered as lunch to a rat. The rodent took just a bite of the baked potato, but then changed its mind immediately. As a result, the rat has not eaten anything of what the people had offered.

Experts said that fast food does not change in its appearance, but it does change inside inexplicably.

"Just think of sterilized milk that is available in paper packaging. This milk does not go off, it becomes rancid. Even biologists can not explain the processes that take place in fast food. This food is abundant with conservatives and antibiotics, and even mould and bacteria can not decompose it," biologist Mikhail Vorobyov said.

The rotting process in fast food seems to be disguised, but its results are just as harmful as those that occur in  natural products.

"Let's take sausages, for example. They are red or pink. This color appears because of nitrates. In spoiled products, they turn to poison," the biologist said.

This is not the first experiment conducted with fast food from Moscow restaurants. In 2008, a journalist volunteered to eat only fast food for two weeks. As a result, the man put on five kilos of weight. It turned out that it was hard for him to feel satiated, and his body was asking for more food all the time. He said that he could feel heaviness in his stomach immediately after meal and hunger just two hours after square dinner.

Two weeks after fast food diet, the volunteer started suffering from labored breathing and pains in the legs. Digestive problems and lancinating pains in the stomach appeared ten days later. On the 12th day, the taste buds on the man's tongue stopped reacting to spices. The man started having migraines and became sensitive to weather.

Dietitians said that the experiments revealed the secret of fast food restaurants. From the point of view of nutritional qualities, fast food is imperfect. It does not contain many vitamins and microelements, which the human body needs to consume every day. That is why, even if a person has a substantial lunch in a fast food restaurant, he or she may feel hunger still. Fast food is poison in disguise to the body.