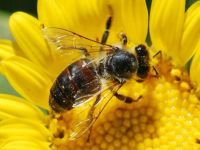 A Brazilian experiment puts the toxin of the bee as a promise for treating arthritis. Science is unraveling slowly, the therapeutic potential of the dreaded bee sting

They say the difference between poison and medicine is in the dose. Not least, is the popular belief that touts the stings of bees attenuate certain health problems such as joint pain. "There are reports of individuals with arthritis who feel an improvement after being attacked by the insect," says immunologist Fábio Morato Castro, professor at the University of São Paulo (USP).

This side effect is reported by some victims according to a group of researchers at the Medical School of USP to investigate the authenticity of the story. "We created a laboratory model to determine if there was any truth to it," says Castro. Did science have to do some arm twisting?!

The researchers measured the therapeutic potential of venom in rabbits. Except that, for purposes of study, they had to reverse the natural order of things. First, they administered the toxin to guinea pigs through a bag installed in the back of the animals. The venom promotes a site inflammation, which stimulates the body to release glucocorticoids, hormones responsible for an anti-inflammatory effect - a defense reaction of the body to maintain balance. Later, the scientists induced the onset of arthritis in rabbits.

Glucocorticoids, already immersed in the bloodstream, were quick to quell the inflammation in the joint. "These hormones play roles in arthritis," says pharmacologist Susan Veríssimo de Mello, co-author of the study.

Notice that there is no need to apply the toxin on the problem site - on one knee, for example. "The poison does not require this operation because the glucocorticoid is produced by the body. So it can be applied elsewhere," justifies Suzana. Amid the tests, the team reached the optimal dose: 1.5 micrograms per kilogram. Coincidence or not, this is equivalent to a bee sting. Given the correct amount, the results did not take long to appear. "We see a reduction in the levels of a substance that indicates the presence of pain and inflammation in the joint," says Suzanne.

However, those with arthritis should not chase a hive to seek relief. The study authors emphasize, in chorus, it is still impossible to extend the results to humans. Although research of this kind exists in other countries, only in Brazil alone could clinical use be justified. Another issue is that the poison may not be a panacea in the world of arthritis - and there are 118 kinds of the disease!

The bee does not seem to give a solution to common problems and serious conditions like rheumatoid arthritis - marked by the aggression of the immune system to attack the joints. "This is because the effect of the anti-inflamatory poison would be short of the needs of patients," said Maciel. Although these are answers that only time can provide, the toxin is adding to the therapeutic arsenal for the ills of the joints. And to think that the only virtues of bees to health were restricted to propolis and honey ...

THE TRAJECTORY OF POISON

Understand how it is obtained and how help quell arthritis

1. THE COLLECTION
A device is positioned in front of the hive. When a bee sticks to it, it gets a shock. Instinctively, it stings, releasing venom. This attracts its companions, who have the same reaction. In contact with air, the toxin turns into dust.

2. PURIFICATION
Poison Powder is taken to a lab and put into a machine capable of separating proteins from other substances. Those are exactly the proteins that attack the body attacked by the insect.

3. IMPLEMENTATION
Ready, the fraction of the poison is administered to the rabbit. There, it creates a local inflammation that excites the adrenal gland of the animal to produce glucocorticoids, hormones, anti-inflammatory action.

4. The IMPACT
These substances enter into the bloodstream and move on to the joints with arthritis, or hostages of an inflammatory process. Glucocorticoids, in turn, are able to mitigate the problem, reducing pain and swelling.

UP TO THE CREASE!?

A cream made with bee venom and marketed in Europe is causing an uproar by supposedly erasing the marks of time on the skin. Its powers would be able to replace the botulinum toxin - a substance applied by injection into a muscle to prevent them from contracting. But the Brazilian Society of Dermatology warns that there are no scientific studies proving the effectiveness of this cosmetic. "And because no cream can reach the facial muscles," explains Andrea Mateus Moreira, coordinator of the Department of Cosmetics entity. "Not to mention that the venom can cause allergic reactions," he warns.

Serum antiabelha created in Brazil promises to undo the effects, often lethal, of attacks by swarms

Those who by chance bump into a hive can be forced to face, at a marked disadvantage, hundreds of bee stings. "When a person is bitten by about 200 insects, toxins in the venom affect the kidneys, liver and heart and can lead to death from multiple organ failure," said biologist Keith Souza, University of São Paulo, which since 2008 engages in the development of a serum capable of neutralizing such a devastating effect. "We extracted the venom of Africanized bees, the most common in Brazil, and injected into horses," says the expert. "These animals are producing, then, antibodies, and when they arrive at appropriate levels, we collected blood from the animal to use in plasma, which concentrates these substances." So far, in experiments with rats, the serum proved efficacious. "We are now developing a third batch of the product so we can begin testing in humans."

TO TAKE a sting

The sting of a bee cannot only devastate the vital organs, but in some people, it causes allergic reactions with symptoms that range from a simple itch or pain until the swelling of the glottis - the opening in the larynx. This makes it difficult to breathe and, in extreme cases can kill. "Faced with a malaise after the attack, the ideal is to run a hospital, where doctors can remove the sting and administer an adequate remedy," says Keith Souza. "And if you are allergic to stings you must always carry medical information reporting on this predisposition."