A study of Egyptian mummies has proved that cancer was extremely rare in classical times, leading experts to conclude that it is a relatively modern disease, caused by lifestyle and eating habits, being endemic in industrialised societies. To what extent is this the case? 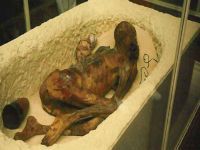 In his article entitled "Egyptian mummies prove cancer is man-made", US-based writer and investigator Terrence Aym* claims that while "cancer kills millions of people annually...the strange fact is that there is almost no trace of the insidious killer among the remains of ancient peoples".

Aym quotes Professor Michael Zimmerman, the US biologist, who recently declared in an interview with a British newspaper, "In an ancient society lacking surgical intervention, evidence of cancer should remain in all cases". However, in a study of the Egyptian mummies, it simply does not exist...

Zimmerman concludes "The virtual absence of malignancies in mummies must be interpreted as indicating their rarity in antiquity, indicating that cancer-causing factors are limited to societies affected by modern industrialization". Zimmerman was led to this statement after he and his associate Rosalie David conducted a careful study of ancient literature, looking for any evidence of carcinomas. They found nothing.

This does not mean that the disease did not exist at all, however, although cancer as a mass killer does seem to be linked to the modern age. The Greek physician Hippocrates used the word for "crab" (karkinos) to describe tumours while the first documented case appears from a papyrus report of eight tumours on the breast, in 1500 BC, which was treated by cauterisation ("the fire drill"). Indeed, scientific evidence points towards the Egyptians developing the ability to operate and remove surface tumours while literature indicates that they knew the difference between malignant and benign types of cancer.

It was really not until the 18th century when the science of pathology took hold in Europe on a widespread scale, in which physicians performed autopsies to determine the cause of death. Among the first was Giovanni Morgagni of Padua, whose findings gave rise to the science of oncology, the study of cancer. In the same century, the Scottish surgeon John Hunter (1728-1793) had discovered that certain forms of cancer, namely "moveable" tumours, which had not invaded tissue, could be removed. By the mid-19th century, mastectomies were being performed.

There is no doubt that an unhealthy lifestyle, obesity and bad eating habits, however, have made what used to be a relatively rare disease far more widespread, so we may indeed conclude that wile cancer may not be entirely man-made, the hand of humankind in its propagation is very clearly visible.