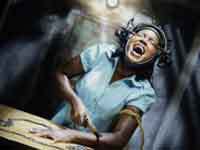 These days it is difficult to imagine that at some point complex surgical operations were performed without general anesthesia. A well-known example is 1961, polar explorers in Antarctica. The expedition doctor diagnosed himself with acute appendicitis and conducted a surgery with the assistance of his expedition colleagues. Recently a motion picture was released about an American mountain climber who cut off his own arm.

These days it is difficult to imagine that at some point complex surgical operations were performed without general anesthesia. Even at a dentist's, in many cases you can order a general rather than local anesthesia.

Yet, once everything was different.

Ether was proposed as anesthesia in the middle of the 19th century by William Thomas Green Morton, of whom later it was said that he entered a surgery room as an unknown dentist, and exited as a world-renowned scientist. Use of chloroform was suggested at the same time by James Young Simpson, but chloroform was much more harmful for health.

The progress in medicine has caused theological controversies. The church was strongly opposed to analgesia, referring to the Bible: "In pain you will bring forth children" (chloroform was initially used by gynecologists to relief delivery). Typical were comments like"Pain relief comes from the Devil." Simpson wittily referred to the fact that the idea of anesthesia is of a divine origin, he would never have thought of it himself, and generally, according to the Bible, Adam was put to sleep before the operation on rib removal.

Funny, but at some point it was the reasoning a lot of things depended on. You would not want to be without general anesthesia during a major surgery, wouldn't you?

But sometimes circumstances are not as we would like them to be. Sometimes surgeries were performed without anesthesia even in the 20th century. And we are not talking about the Civil War and the Great Patriotic War, but about a completely peaceful time. And here it would be interesting to trace the causes that led to such events.

The most famous example is 1961, polar explorers in Antarctica. Expedition doctor Leonid Rogozov (at the time he was 27 years old) diagnosed himself with acute appendicitis. Antibiotics have not helped, and a surgery was required. There were no other physicians, and you can imagine the distance to the nearest hospital.

He had to prepare three assistants - a meteorologist, engineer and head of the station. No one had even rudimentary medical education. One of them assisted, the other was responsible for lighting, while head of the station watched that the patient himself (who was also a doctor) and other assistant did not faint.

From the diary of the physician: "I did not let myself think about anything except business. . . In case I lost consciousness, Sasha Artemyev would have given me an injection - I gave him a syringe and showed how it's done. . . My poor assistants! At the last minute I looked at them: they stood in their white robes and were themselves whiter than white. I was also scared. But then I took the needle with Novocain and gave myself the first injection. Somehow, I automatically switch to the operating mode, and from that moment I did not notice anything other then what I was doing."

Professionalism and composure have won - the surgery was successful, with no complications. But in this case, despite the complexity of the surgery, local anesthesia was present. Sometimes appendicitis is excised under local anesthesia.

In 2003, the story of mountain climber Aaron Ralston spread around the world. In one of the canyons in Utah his arm was pinned by a large dislodged boulder. He could not move it, and later on the weight of the boulder was estimated to be in an area of half a ton.

A few days later he was out of water, there were no one around, and Aaron made a decision.

Media reported that he spent a lot of time turning his arm to break the bones of the forearm. Most likely, the stone has broken his bones, and he just had to put them into the proper position. Proper to allow the resection with the tools he had at hand - a dull folding knife.

The climber was able to amputate his hand, and then a few hours later he came upon tourists. In January of 2005, with the prosthesis in place of his hand, Aaron climbed the highest peak of the Andes - mountain Aconcagua (6,960 meters) in Argentina. In the fall of this year the film was released named "127 hours" based on the events described.

A similar case occurred in Connecticut, USA. Jonathan Metz tinkered with heating in his basement and a part of the boiler collapsed on him, crushing his left arm. He failed to escape in three days and there was no point in calling for help from the basement. When it became clear that gangrene was starting, the American tightened his hand and grabbed a chainsaw.

It is hard to answer the question what is better: to saw off your own arm with a dull penknife or tear the flesh with a chainsaw. Both cases are impressive. But in both cases, besides willpower, there was a compelling force of circumstances (although safety rules still need to be complied with - these things obviously should not be done while alone).

However, there are situations far more ambiguous.

In November of 2004, an unemployed Bosnian Emir Yavoras discovered that he, firstly, had strong abdominal pains, and secondly, had no health insurance. He made a cut with a razor and using a needle was able to remove kidney stones from the urethra, and then sew up the wound.

This operation is more impressive than appendectomy: you cannot even place a mirror so that you can see everything. But the impressive story has another factor: the extreme self-treatment is not due to force majeure, but only lack of money for treatment. It is likely that similar cases will occur more often.

In 2000, in Mexico, Ines Ramirez Perez was able to perform a Caesarean section with a kitchen knife and anesthesia in the form of local liquor - just because she could not afford to go to a maternity ward.

There was a case in Russia when a female resident of Primorye cut out her breast tumor under Novocain. The patient spent a month collecting references and then was given an appointment for a preliminary examination in 40 days. The patient did not want to wait.

Looks like the medicine (and not only in Russia) re-classified in the service "just for the rich" and we may soon see an advertising "treat yourself!"