Every other person on Earth is crazy? 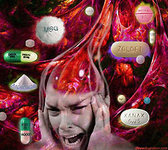 What kind of people can be categorized as mentally unbalanced individuals? The fifth edition of Diagnostic and Statistical Manual of Mental Disorders shows that nearly a half of us can be referred to as such.

The new, yet unpublished research by the American Psychiatric Association contains descriptions of clinical symptoms and other diagnostic criteria of mental disorders. According to the study, depression, psychosis, control of temper, gluttony attacks and children's tantrums shall be considered as mental disorders.

British researchers stated that expanding the list of psychiatric diagnoses would formally enlarge the number of mentally unbalanced individuals and result in the need to provide adequate treatment for them. It is worth mentioning that practically all drugs used in psychiatrics trigger significant side effects.
"As a matter of fact, it is hard to demarcate between healthy psych and what is considered to be the norm. Every human being can act inadequately in a state of stress. But even an outwardly calm and balanced person can turn out to be unstable mentally. A person may seem absolutely normal until they do something inadequate. I had a patient, a male, who got married and lived happily with his wife for several years, the woman was not noticing anything. One day he grabbed his three-year-old son and threw him against the wall. As a result, the man found himself in a mental institution," Russian psychiatrist Alexander Nikonov said.

Unfortunately, the specialist said, people may often treat others as mentally disturbed individuals. However, such a diagnosis implies meticulous examination. Some people may often ask for coercive mental treatment for their relatives. Later it may turn out that they simply can not get along with each other in one house. Children may act inadequately too, which makes their parents come to psychiatrists for consultations.

"Such parents may read something about autism or children's hyperactivity and it may seem to them that their child is sick. Children can be different: some are too active, others are secluded and quiet, but it does not mean that they have psychic disorders. But parents would come and say: "Prescribe something to my kid, he is not normal!" It's a positive factor that parents come to the doctor who will of course convince them of the opposite. However, many prefer not to ask for any medical help and just give their kids diphenylhydramine instead," the doctor said.

So what shall be considered as deviancy from the medical point of view?

"It can be, for example, socially dangerous behavior, when an individual attacks someone without any reasons for it, and tries to do harm to another person. There is also the persecution complex, when an individual says that they are being followed all the time, that someone always steals something from them, etc. In most cases, this information is not true to fact and testifies to mental disorders. Others can say illogical things - they can forget that their relative is dead and they speak about them as if they are still alive. Others may constantly talk to invisible interlocutors: they react and gesture as if that other person is near them indeed.

"If a person is not sociable at all, it can be considered as a mental disorder too. Such people can be self-absorbed, they would spend their days absolutely alone, doing nothing, not saying a word. If it lasts for a long time, one should ask for help. Anyway, it is only a specialist who can diagnose a person with mental disorders, and I urge everyone not to treat your friends or someone you know as mad people," the psychiatrist said.