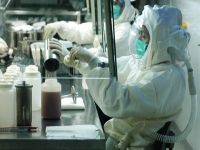 Not in Brazilian ports (except the land), but the news is already circulating around the world of a study that researchers from five developing countries, in collaboration with the McLaughlin-Rotman Centre for Global Health of Canada (MRC) published today in the journal Nature Biotechnology, puts Brazil and Cuba as models in manufacturing low-cost drugs to poor people.

The work, the first study in large-scale "South-South" cooperation in the field of biotechnology related to health, highlights the cooperation between the BioManguinhos - a company linked to the Oswaldo Cruz Foundation in Rio and Instituto Finlay, Cuba, as a model able to save thousands of human lives. I will transcribe what Halla Torsteinsdóttir, Director of the study and member of the McLaughlin-Rotman Centre, the agency EFE said because it is very nice, we like to start the day with her:

-In 2007, there was an outbreak of meningitis in the "meningitis belt," a band of sub-Saharan countries stretching from Senegal to Ethiopia. The World Health Organization (WHO) began seeking a company that could produce an appropriate vaccine for the epidemic."

Thousands died and tens of thousands have been affected by the disease, which is the result of inflammation of a thin layer that surrounds the brain and spinal cord resulting from a bacterial infection. WHO determined that collaboration between the Finlay Institute, which has extensive experience in the fight against meningitis in Haiti, and the company Bio-Mangunhos, was the best option to produce a vaccine against this type of meningitis.

- Vaccines against meningitis created by large pharmaceutical companies were more complex and expensive than that derived from Brazil or Cuba, because they are designed to combat several types of meningitis. And did not cover the cepa (a specific bacteria) in Africa. The vaccine produced by Western companies is $80 per unit, while the price of those produced by the cooperation between Cuba and Brazil was less than $1."

According to research, Brazil, China, Cuba, Egypt, India and South Africa have launched about 280 South-South partnerships for the development of medicines and treatments. The country that has the most initiatives is Brazil, with 64, followed by South Africa with 61 and Portugal with 54. Cuba has 34, seven more than China.