In the 21st century most couples will not be able to have children. Those who will manage will have mentally retarded kids. 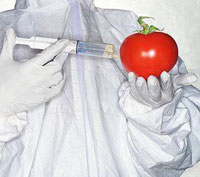 Russian scientists conducted an experiment proving that the main action principle of genetically modified produce (GM) is a “ban for procreation” for next generations of mammals.

This is the effect wanted from GM produce by Microsoft founder Bill Gates who started the struggle against the growth of the world population. Today, the community of billionaires throws GM “bombs,” disguised as charitable intentions, on African and Asian countries. Meanwhile, in Moscow alone where state purchasing of transgenic produce is prohibited, 20 % of local and 35% of imported produce are genetically modified.

Russia Today: Genetically modified seeds have their day in court

In the early 1990s, Nicaragua, Mexico and Philippines were affected by a horrible epidemic, and it took scientists a while to find its source. Perfectly healthy young women had miscarriages during the second and third trimesters of pregnancy. Further attempts to get pregnant had the same results, followed by infertility. Doctors were at a loss. The only common denominator in all cases was the women’s participation in mass tetanus vaccination supervised by the World Health Organization and funded by Rockefeller’s Fund.

It was hard to question the sincerity of the intentions. However, Roman-Catholic organization Comite Pro Vida based in Mexico decided to test capsules with the vaccine and found something horrible. The solution contained human chorionic gonadotropin (HCG), which is a natural hormone required to maintain pregnancy. But how could the hormone become a part of the vaccine? Further analysis shocked the scientists. Combination of tetanus agent with HCG stimulates formation of antibodies for the latter, making women unable to carry a child. In other words, the vaccine was a concealed form of abortion.

When the plot of the billionaire David Rockefeller and the WHO was revealed, GM continued what they have started. Two year ago, the exact same things that happened in Nicaragua and Philippines occurred in Zimbabwe and Guinea. This time, the women who suffered shared love for canned corn. Despite the expectations, tests of the cans’ content have not revealed any life threatening components, and the amount of preservatives was compliant with the norm.

It was when the first suspicions regarding bio terrorism and destructive influence of transgenic substances on humans were raised by a toxicologist with the South African University.

The epidemic of infertility in the developing countries has not occurred out of the blue. Bill Gates, the founder of Microsoft and one of the wealthiest people on the planet who has the image of a charitable philanthropist, is involved in solving global health issues. He fights lack of food and poverty in Africa, allocating billions of dollars to support the struggle. Recently he openly stated that the goal of his charity is reduction of the planet’s population, first of all, in the third world countries.

“It is an open secret that the world magnates, in particular, the US, Japan, Canada and the EU, are concerned with the deficit of natural resources,” explains Irina Aliverova, Doctor of Sociology.

“The UN has an official document that divides the world population into the main group (golden billion) middle group, who has insufficient natural resources, and auxiliary group, represented by the population of developing countries, including Russia. The last category, nearly five billion people, should be gotten rid of as weeds.”

One of the mechanisms of a horrific program of Gates and Rockefeller currently supported by the US government was once revealed by Mitch Hein, president of biotech company Epicyte. He said that antibodies were taken from women with rare condition, immune infertility. The genes were isolated, and through the methods of genetic engineering they were inserted into the genome of regular corn seeds supplied to third world countries. It means that Africans were sowing on their fields genetically modified corn-murder with inserted hidden contraception. Hein explained what happens to people when they eat this corn. Generally, antibodies get drawn to the surface of sperm. They attach to it and make sperm so heavy that it cannot move forward.

In Russia, production of GM produce is prohibited, while consumption of five transgenic cultures is allowed (beets, corn МОН 810 banned in Europe, soy, potatoes and rice). There is no official conclusion regarding harmful effects of GM on humans. Yet, Moscow Institute of Biology named after Koltsov and National Association of Genetic Safety conducted an independent experiment. They fed hamsters with transgenic soy for a year. The same soy is used in Russia to feed cattle, and it is supplied from Holland as GM-free. This soy is also allowed for human consumption. Now it is clear what it may result in – rodents expressed delayed growth and development and serious decrease of reproductive function that resulted in inability to obtain third generation of hamsters.

“Infertility in third generation of animals grown on GM products means that the nature puts an end to these species and does not let them procreate,” says Alexander Baranov, senior associate with the Institute of Biology. “This means that GM food leads to evolutionary dead end and degradation of species. During the research another interesting fact was discovered. The animals develop pilosis of oral cavity . ”

Although scientists are not sure that it was the GM food that caused mutations, the world had noticed long time ago that toxic proteins and mutant combinations may develop in transgenic products.

No scientist will agree to predict how artificially inserted plant gene will behave in a chromosome. Possibly, three generations later women will give birth to children with hairy mouths, just like those of hamsters. Or, they may not be able to conceive at all. Maybe this is the reason why Russian and foreign manufacturers of transgenic products are afraid to mark the products as GM and prefer paying fines for violation of the law. There is no other method to recognize GM products.

As the number of infertile couples in Russia grows from year to year and today five million families are unable to have children, it looks like the hellish machine of Bill Gates has reached Russia. While scientists are afraid to experiment on humans, everyone who goes to a grocery store unwillingly becomes a guinea pig. Russian Academy of Science suggested introducing a moratorium on GM products until their safety is proven. The scientists’ attempts to get through to the officials were fruitless. Meanwhile, the fund of Bill and Melinda Gates is preparing a new GM bomb, transgenic “golden” rice that causes cillae on fallopian tubes. Again, it is hidden behind charitable intents. Allegedly, the rice replenishes vitamin A and iron in the body. Recently Bill Gates gave a speech at a conference in Long Beach where he mentioned that he was looking forward to a vaccine that will reduce growth of the world population.

What other countries do:

1. India refused the US humanitarian aid in produce at the amount of $100 million a year.
2. China banned sales of GM on its internal market, but its export is still going on.
3. GM produce is not used in Slovenia, Austria, Greece, France, Luxemburg, and Great Britain.
4. In Great Britain the produce has to be labeled even on restaurant menus.
5. Italy does not buy transgenic seeds.