The World Health Organization released a report this week revealing record levels of drug-resistant Tuberculosis, with Asia as the epicentre of a condition whereby standard drugs no longer have any effect on the disease, which destroys the lungs. A more shocking statistic revealed by this report is that only seven per cent of patients are diagnosed in time. 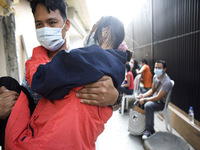 The WHO’s Multidrug and Extensively Drug-Resistant Tuberculosis: 2010 Global Report on Surveillance and Response is a comprehensive report on an alarming new development – the rapid spread of the multi-drug resistant form of the disease (MDR-TB), which affects one in four TB victims in some parts of the world. MDR-TB is so resilient that it renders ineffective Isoniazid and Rifampicin, the most powerful two drugs currently employed against TB. It causes 1.7 million deaths a year, worldwide.

Moreover, the drug-resistant form is deadly: it kills around one third of those who catch MDR-TB, according to the report, which shows that around 50 per cent of the cases in 2008 were registered in the PR China and India, while Africa accounted for around 16 per cent of the cases, namely 69,000 out of 440,000 cases registered in that year. Cure rates for standard, drug-susceptible TB are around 95%.

Drug-resistant TB develops due to the improper use of drugs in Tuberculosis patients, often due to the fact that TB patients do not have the full course of their treatment administered, either because of deficient control by healthcare workers or else because the patient her/himself does not follow the course through to the end, creating and building up multi-drug resistance in the bacillus which causes TB.

Tuberculosis is caused by Mycobacterium tuberculosis. It is passed from person to person through droplets from the throat and lungs transmitted through coughing, sneezing or from infected surfaces. Symptoms include coughing up blood, weakness, chest pains, loss of weight, night sweats and a temperature.

While in north-western Russia, 28% of patients diagnosed with TB had the Multi-drug resistant form (a record), Orel and Tomsk registered a sharp decline in cases of MDR-TB over the five-year period 2003-2008. Estonia and Latvia were other regions mentioned in the report as having reversed the trend for new cases while the USA and Hong Kong were praised for their sustained success in reducing MDR-TB.

However in other parts of the world, the cure rate is only 60 per cent. This highlights the need to implement WHO recommendations, which were responsible for the reduction rates in Russia, the USA, Estonia and Latvia.

WHO recommendations to combat MDR-TB

The World Health Organization recommends improvements in laboratory facilities to make testing faster and more reliable, treatment with stronger and more effective drugs and a reduction in the regimens of treatment, currently set at two years, as well as a more efficient diagnosis process – currently only seven per cent of MDR-TB patients are diagnosed as having this form of the disease.

According to the UN Health Agency’s website, “WHO estimates that one-third of the world's population is infected with Mycobacterium tuberculosis”. While not all develop the disease, the potential threat to humanity is apparent, for if TB is passed from one person to another (and with increased migration and travelling, contact among people is more and more facilitated) and if the host has MDR-TB, it is this form of the disease that is passed on.