3D Films Can Make You Paranoid

A passion for 3D films can be very bad for your eyes. Movie–goers should not watch 3D films more than three or four times a week, whereas such films are not recommended at all to some people for medical reasons, Russian oculists believe. 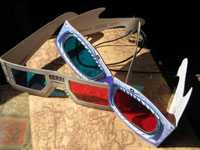 3D Films Can Make You Paranoid

Russian eye doctors had to pay attention to the phenomenon of 3D films as a result of numerous complaints they received from those who had a 3D movie experience. After watching a film in special polarized glasses, people would complain of discomfort, headache and difficulties in adapting their eyesight to the environment, the Noviye Izvestia newspaper wrote.

Polarized 3D glasses create the illusion of three-dimensional images by restricting the light that reaches each eye, an example of stereoscopy which exploits the polarization of light. To present a stereoscopic motion picture, two images are projected superimposed onto the same screen through different polarizing filters. The viewer wears low-cost eyeglasses which also contain a pair of different polarizing filters. As each filter passes only that light which is similarly polarized and blocks the light polarized in the opposite direction, each eye sees a different image. This is used to produce a three-dimensional effect by projecting the same scene into both eyes, but depicted from slightly different perspectives. Since no head tracking is involved, several people can view the stereoscopic images at the same time.

Specialists of Russia’s Eye Microsurgery Institution said that a person watching a 3D movie may feel discomfort and dizziness during the first 30 minutes after the film ends: the muscles responsible for the crystalline lens become weak and the color response decreases.

The above-mentioned symptoms are connected with the brain’s reaction to three-dimensional images. Specialists do not recommend this format to those who suffer from motion-induced sickness. 3D films are not recommended for those who may have a strong desire to remove the glasses. Up to ten percent of people may have the unpleasant symptoms, Russian scientists said. Two or three 3D films a week is a norm for everyone else.

It is worthy of note that stereoscopic films do not harm eyesight. However, reusable plastic glasses may transmit eye infections.