How Did My DNA Make Me? 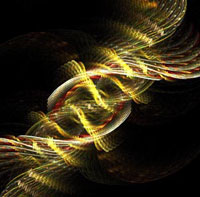 How Did My DNA Make Me?

Haven't you ever asked yourself how you got your nose, eyes, ears, fingers, toes, and everything else? How did your DNA bring all this about? Before we answer that question we need to know just a few simple things about DNA.

DNA is the abbreviated name for the genetic code and it is exactly that - a code. It is a molecular string of chemical information.

DNA is located in the nucleus of our cells and is made up of smaller molecules called nucleic acids. These smaller molecules in DNA are arranged in a sequence, just like the letters in a sentence. The sequence of these nucleic acids tells the cells of our body how, where, and when to build our nose, eyes, hands, feet, and everything else. If the sequence for a particular trait isn't in our genetic code, then our bodies won't build it.

If the sequence for producing wings is not in the genetic code of an animal then that animal will not develop wings regardless of the environment.

When food is digested and broken down to its basic amino acids, the various amino acids are then rearranged in a certain sequence to form cells that make up the various tissues and organs. What sequence these amino acids come together in is determined by the sequence of the molecules in DNA.

When scientists study genes, they are studying segments of the DNA molecule.

No one has shown that DNA can come into existence by chance! It takes DNA to get DNA! In other words, there must already exist DNA to direct the formation of more DNA.

Besides all this, none of these molecules can exist for long outside of a living and complete cell! It's a Catch-22 situation for evolutionists.

The mathematical odds of even the simplest DNA molecule coming into existence by chance is comparable to a monkey typing the sequence of all the letters and words in a dictionary by randomly hitting keys on a computer keyboard.

An amazing fact of biology is that every cell in your body, except for your reproductive cells, contains the complete information for the whole body. Yet not all the information in the DNA of your cells is allowed to be expressed or translated. For example, a cell from your hair also contains the complete genetic information for your eyes, brain, heart, liver, skin, and all the rest of the various organs and functions of your body (it's because of this that cloning an entire organism from any cell of the body is possible). However, in the hair cells of your body only the genetic information for your hair is allowed to be expressed, while all the other information is literally "blocked off" from being expressed or translated.

Of course, it is good for us that the cells in our bodies were designed this way; otherwise every cell in our bodies would also be everything else at the same time, which would create utter biological chaos. Truly, we may say with the Psalmist that "we are fearfully (or awesomely) and wonderfully made" (Psalm 139:14). Such biological precision in the cells of our bodies is still beyond the full comprehension of modern science. But the fact remains that the more we comprehend or understand the cell and how it functions, the more we must respect the wisdom behind its engineering and design.

Most biological variations in species are not because of mutations but because of new combinations of already existing genes.

True mutations are accidents in the sequence of the genetic code caused by environmental forces such as radiation, and almost all true mutations are harmful as would be expected from accidents. Even if a good mutation occurred for every good one there would be hundreds of harmful ones with the net effect, over time, being disastrous for the species as a whole.

The scientific evidence shows that mutations have no ability to construct entirely new or more complex genes. At the very best, mutations only have the capability of producing variations of already existing genes or triggering the duplication of already existing traits (i.e. an extra finger, toe, or even an entire head).

Science cannot prove the existence of God but neither can science prove that we are here by chance.

Both sides of the evolution/intelligent design controversy should have opportunity to present their scientific arguments to students. No one is being forced to believe in God so there is no real violation of separation of church and state.

The author's comprehensive essay "The Natural Limits of Evolution" is available for reading at www.religionscience.com.

The author, Babu G. Ranganathan, has his bachelor's degree with concentrations in theology and biology and has been recognized for his writings on religion and science in the 24 th edition of Marquis "Who's Who In The East."