AIDS: The Greatest Deadly Lie in the History of Medicine

Mankind is facing a new threat of swine flu. A few years earlier, bird flu and SARS caused panic all over the world. AIDS has been on the top of the list of “scary” diseases for thirty years. 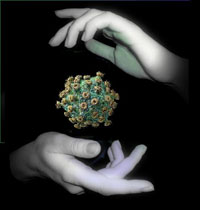 AIDS: The Greatest Deadly Lie in the History of Medicine

Where are millions of victims of SARS and bird flu? Where is deserted Africa allegedly doomed for total extinction from AIDS? Gor Shirdel, M.D. of Irish descent who is currently practicing in Kiev, has cured two patients from AIDS.

“I don’t believe that AIDS is incurable. Weak immune system is an issue that has been around for at least 200 years. It can be solved. Viruses found in the blood of those with AIDS is not the cause of the disease, it’s a consequence of immunodeficiency.

"The world thinks AIDS is incurable because two doctors, an American Robert Gallo and a Frenchman Luke Montanye, managed to convince the world in the early 1980s that AIDS is caused by "human immune deficiency virus" (HIV). Montanye even received a Nobel Prize for his “discovery.” Yet, they cannot find this virus in the human body. AIDS patients are diagnosed through the tests that register antibodies in blood, not HIV.

"These antibodies are developed in blood serum when any virus or bacteria enters the body. The same happens in case of flu, or any other illness or a shot, etc. When antibodies are found in the blood serum, it does not mean that there is a virus in the blood. Positive HIV tests shock patients because proponents of infectious AIDS convinced everyone that an HIV-positive patient will sooner or later die, and that this disease is incurable.

"I think this is the result of purposeful policy of the American Center for Disease Control and Prevention whose annual budget for combating AIDS amounts to two billion dollars.

"However, there are over six thousand outstanding doctors and scientists in the world who voice their arguments against the opinion that AIDS is incurable. They include Peter Duesberg, PhD., the author of “Inventing the AIDS Virus,” Kary Mullis, a biochemist and Novel laureate, and Robert Willner, the author of “Deadly Deception.”

"In 1993, Willner jabbed his finger with blood he said was from an HIV-infected patient and did not get infected. He said he’s done it to put the end to the greatest deadly lie in the history of medicine.

"Statistics is stronger than lies. If the published numbers were true, Africa should have become barren by now. Yet, its population exceeds one billion people. The population of South African Republic that has the most cases of AIDS in the world should have declined, but it grew 1.7 times within the period from 1986 to 1999.

"Immunodeficiency does exist. We do not argue with it. When patients with immunodeficiency are exposed to viruses and bacteria, they die from tuberculosis, pneumonia, exhaustion, and salmonella. AIDS is associated with dozens of diseases that are not linked to it. Not a single person died from AIDS itself. Drug addicts die from drugs that ruin their immune systems. They also die from certain medications prescribed for the patients diagnosed with AIDS. According to an estimate of Peter Duesberg, 10 to 50 thousand people have died from such medications.

"AIDS epidemic that allegedly threatens the world is a profitable business project developed by the largest pharmaceutical companies and corrupted officials of international medical organizations," the scientist said.

Vladimir Nikolaenko, M. D., thinks that doctors all over the world cannot be fooled into treating a made-up disease. “Blood tests are used for AIDS diagnostics. If there is no disease, then what affects the results? Also, patients who take anti-viral medications get stabilized. It would not happen if there were no disease.

"As of the end of October 2009, there were 516,167 HIV-positive people in Russia, 4,474 of them are children. Obviously, it does not mean that all of them will develop AIDS, but we have to be prepared to provide them with adequate treatment if it does happen.

"What if we declare that AIDS has never existed? The government will stop allocating funds to combat AIDS. Millions will be helpless before the scary disease. Do we have a right to sentence them to death? The answer is obvious. As long as the existence of AIDS has not been denied 100%, doctors must treat their patients and provide them with modern medications to sustain their lives."