Fear of Socializing Leads to Obesity, Depression and Alcoholism

The term ‘sociophobia’ – fear of socializing – appeared in medicine in the beginning of the 1960s. In Russia, the problem received serious attention only three or four years ago. 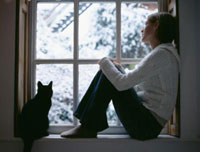 Fear of Socializing Leads to Obesity, Depression and Alcoholism

In Russia, sociophobia is traditionally regarded as neurosis. A patient suffering from this form of phobia would most likely be recommended to take tranquilizers and have several sessions of therapeutic counseling. The ‘counseling’ is presumably about such affirmations as “You do not have to pay attention to that” or “Take a grip on yourself.” It goes without saying that there was absolutely no use in such therapy and many of those suffering from sociophobia did not even wish to ask for medical help.

What is sociophobia today from the point of view of modern-day mental medicine and how can it be distinguished from common shyness?

Sociophobiacs feel fear in situations, which psychologists refer to as socially significant. It may happen when a person needs to :

- get acquainted with other people or be introduced to other people
- communicate with people of higher ranks
- talk to someone over the phone or take in guests
- do something under the supervision of other people
- become an object of jokes
- eat at home with guests or family members
- make a public appearance in front of an audience.

Physiologically, sociophobia is accompanied with heartbeat, shivering, perspiration, muscle tension, dry mouth, the feeling of butterflies in the stomach, the feeling of heat or cold and a headache. In critical situations, a sociophobiac may have indigestion, stomachaches and diarrhea. As a result, a person begins to avoid the situations which may trigger the above-mentioned consequences. Avoidance behavior is a peculiar feature of sociophobia.

This condition leads to two serious problems. First and foremost, a sociophobiac has fewer chances to receive good education and find a well-paid job. Secondly, some people start taking alcohol or psychoactivatory agents.

Both men and women are subjected to sociophobia equally. The difference is about the avoidance behavior strategy. Men most often use alcohol as their remedy, whereas women prefer to do housework.

Statistically, sociophobia affects one in every ten people. Only less than 25 percent of patients receive adequate medical help.

It is generally believed that sociophobia does not distinguish between the poor and the rich. However, as experience shows, the disease mostly occurs with lonely individuals and those living on low income.

Sociophobia very often affects children. About 40 percent of incidents of social phobia occurs with children below ten years of age; while the majority – 95 percent – with teenagers below 20. Schoolchildren suffer from social phobia most because for a child school is the first serious encounter with the “alien society” in which it can be very hard to find the right spot and adapt to its requirements.

Psychologists say that the social future of a human being is formed in infantry. Mother must hold her child in her arms as often as possible; she must talk to the child in a sweet voice and smile. The primitive set of emotions and feelings, which this mother-child communication has, gives the child an opportunity to see that the new world welcomes him.

If the child does not have enough of such communication, the baby starts showing anxiety because he or she sees the world as something hostile and threatening. The problem becomes much more serious if parents bring their child to a day care center at a very young age. The same happens if mother stops taking care of the child and asks someone else to do it instead.

Every child is afraid of being taken away from their mother – this is the biggest fear that a child may have. This fear takes different forms and evolves as an individual grows.

Many of those suffering from sociophobia develop depression, drug addiction and alcoholism. Medics also see a close connection between social phobia and obesity.

The worst thing about social phobia is that there is no efficient method of treatment against it.