Sigmund Freud was born on May 6, 1856 in the Austro-Hungarian town of Freiberg, on the boarder of Prussia and Poland. His father was a poor wool merchant married for the third time to Amalie Nathansohn, who was old enough to be his daughter. They had children almost every year and Sigmund was their first one. 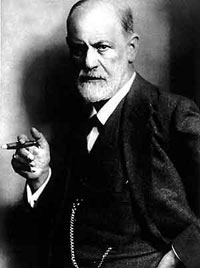 Freud’s father worked late at night, and his mother and her kids lived in a room they rented from an always drunk tinsmith. In the fall of 1859, the poor Freud family left Freiberg and moved first to Leipzig and then to Vienna.

But life in the capital didn’t make them rich. “Poverty and misery, poverty and extreme shabbiness,” Sigmund Freud used to say about his early childhood. He, however, used to recall his diligent studies in a lyceum, his success in learning languages, literature and philosophy, praises of his teachers and hatred of his school mates who made this curly straight-A student cry.

When he grew up, Freud got interested in politics and was studying law and later, philosophy. Soon, under his parents’ pressure, he commenced his studies to become a doctor. His teachers were skeptical since he was very inconsistent in his interests, superficial, and strived for fast and easy success.

Not without difficulty, Freud graduated from medical school and received an internship with the Institute of Physiology where he enjoyed studying fish breeding for six years.

“Nobody has ever seen eel testicles,” the researcher said proudly. “These were not eel genitals, these were rudiments of psychoanalysis,” would say Freud’s students later.

At the age of 22, Freud grew a beard to look more presentable, but it didn’t make him better with women. He was a virgin till the age of 30 and was very afraid to stay alone with women, which always made people laugh.

He met his spouse, Martha Bernays, a short, thin and pale 21 year old, on vacation. Sigmund was stunned by the girl’s sophisticated manners and for the first time in his life, he overcame his fear. However, his courtship was very strange.

Two months after their meeting he wrote her a letter saying that she was not pretty in a way sculptors and artists understand it. The lovers would fight and make up. Freud was jealous of his lady and would make ferocious scenes. However, he couldn’t marry her since didn’t have enough money.

Only two years later a chance to get rich presented itself. In 1884, he brought then little known alkaloid, cocaine, from Merck to Vienna. In the hope to be the first researcher who studied the substance, Freud invited his two friends as assistants and requested they start the research. He himself went for a vacation with his fiancée. Upon his return he found out that the cocaine research was completed without him and the world learnt that cocaine had a local analgetic effect.

“I am not upset with my fiancée for a missed chance,” Freud kept repeating, frustrated with a lost opportunity to make money. However, he later wrote in his autobiography that his engagement was the reason why hedidnotbecomefamous while young.

Freud missed his second opportunity when he was interning with Dr. Sharko, the inventor of contrast shower. The doctor was involved in a profitable business treating hysterical women. Freud intended to reach great success in that area.

Before his departure for France, he wrote to his fiancée: “My little princess, I will come back with money. I will become a great scientist with a big halo over my head and we will get married right away.” But again he failed to get rich. This time it was Freud’s own fault.

While in Paris, the scientist snorted cocaine, drank absinth and wandered around upset with the looks of Parisian women. His cooperation with Dr. Sharko didn’t work out. Sigmund returned to Vienna, frustrated and willing to try the last resort – private practice.

He placed an ad in newspapers: “Treat various disorders,” and his patients came. Freud was unable to work with them sticking to the existing rules because he was afraid to look people in the eye. Looking for a way out, he came up with a strategy to lay people on a couch while he was sitting at the headboard. He didn’t ask questions and just listened very attentively.

The new approach turned out to be effective, and soon Freud used the term “psychoanalysis” for the first time in a medical journal. The number of his patients sharply increased, and, dreaming of riches, the doctor raised his prices. Soon a session with him was as expensive as a good suit.

To save time and money, Freud limited his sessions to 50 minutes. Many patients were ready to speak for hours, but Freud kicked them out explaining that time limits would help them to cope with their disorders. The principle of non-interference, or absolute indifference to a patient, became the essence of this pragmatic approach.

Having received long awaited fame and money, Freud suddenly fell ill. His diagnosis was horrible – oral cancer caused by chain smoking. In April of 1923, the scientist was operated on and given a prosthetic device. His life became unbearable; he could barely eat and talk.

Soon Nazis came to power in Germany, and Austria became a part of the Reich. This spelled problems for a Jewish doctor. After his daughter was arrested and he was investigated by Gestapo, Freud decided to leave the country.

The officials, however, were in no hurry to let him go. He had to humiliate himself by paying a large fine. His family was able to immigrate to London. There Freud’s health became hopeless. On September 23, 1939, by Freud’s request his attending doctor injected him with a morbid dose of morphine.

After Freud’s death, 1500 letters to a strange lady were found in his archives. They say the letters are sensational, but Freud’s will prohibited the letters release. The scientist who devoted his life to finding answers to great secrets of human psychics left his descendants to find answers to his own mysteries.