Alzheimer's disease and the sense of smell are closely connected. 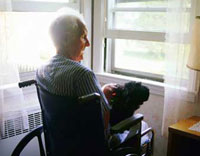 The Russian scientists who have been working on establishing a connection between the sense of smell and the development of certain diseases came to conclusion that the distortion of smell perception may signal the beginning of Alzheimer's disease.

“Our studies give doctors an opportunity to diagnose Alzheimer's disease at its earliest stage,” says Dr. Natalia Bobkova from the Russian Academy of Sciences.

“Alzheimer's disease is one of the main problems which the scientific community is facing today. Despite huge investments and scientific efforts taken around the world the number of people suffering from this disease is growing. About one percent of the population in developed countries and about 15 percent of people over 65 are suffering from Alzheimer's disease,” says Natalia Bobkova.

One of the most important parts of modern neurology is studying the factors which lead to brain degeneration. Alzheimer's disease is a typical example of such a pathological process. This process leads to complete personal degradation, memory loss and spatial disorientation. Today there are more than ten theories explaining the origin of this disease. According to the most popular theory, it is a specific beta-amiloida fiber that causes Alzheimer's disease.

Read also: “Treatment of Alzheimer's disease by new drug to be possible in several years”

Normally this fiber is present in the human body in microscopic proportions. If a person develops Alzheimer's disease, this fiber is accumulated in the brain forming plaques. Patients say that they usually feel changes in the sense of smell when the disease begins.

Russian scientists decided to investigate this hypothesis to find out whether there is a connection between the loss of the sense of smell and the degeneration process in the brain. Alzheimer's usually develops very slowly. That is why it is very important to create the model of the disease. And the Russian scientists have created it.

In their experiments on rats the scientists removed the rodents' olfactory bulbs and found out that the defects in the olfactory system of the rats triggered a fast development of Alzheimer's disease. They explain such consequences saying that the olfactory system is directly connected with such an important brain structure as hypocamp. There is no doubt that the hypocamp destruction leads to the development of Alzheimer's disease.

The model created by the Russian scientists allows not only to diagnose the disease, but to find the most appropriate medicine to cure it.

Read also: “A safe technique for the focused erasure of troubling memories”