American surgeons temporarily removed six organs from a seven-year-old girl. The operation was performed to relieve the girl of a five-kilogram malignant tumor in the abdominal cavity. 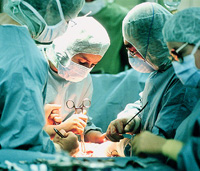 The surgeons removed the liver, the spleen, the pancreatic gland, the stomach as well as the small and large intestines in order to gain access to the tumor. The organs were cooled and kept in special containers for the time of the surgery.

After the 23-hour operation, the liver and the intestines were returned to their place. The stomach, the pancreatic gland and the spleen were so badly deteriorated by the tumor that they could no longer function in the girl’s body.

The surgeons made an artificial stomach from a piece of the girl’s intestine. As for two other organs, a human being can live without the spleen, but there will be severe problems with blood formation and immunity in this case. The absence of the pancreatic gland will make the girl take injections of insulin and digestive enzymes throughout her life.

The operation, which lasted for 23 hours, was the second of this kind in the world and the first to be performed on a child.