Vegetarianism proves to be perversion of nature

Vegetarians can be referred to as true fanatics. On the other hand, they are seriously misled in their beliefs. Practically nobody argues with them, since it is really difficult to convince a vegetarian of his or her self-deception. May be that is the reason why the vegetarian movement develops so actively around the globe and continues to recruit many new members. 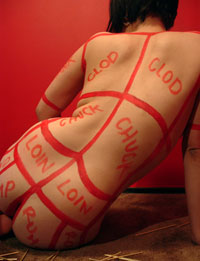 Vegetarianism proves to be perversion of nature

To produce a cell is not an easy process for the human body. Being a parent to all cells, a human being is supposed to be responsible for all of them. The human body is unable to generate all substances necessary for the production of cells. It has only 12 or 20 protein amino acids required for the process. The remaining chemicals are supposed to be delivered with food. Each and every human cell is supposed to be supplied with first class animal protein.

Some may say that there is enough protein in vegetables (beans, for example) True, but recent studies show that vegetable protein can be digested only with the help of its animal analogue.

The human body has its own preferences, by the way. Experts proved that our body requires and assimilates the following substances as construction materials:

Compare this data with that concerning vegetable protein:

This is the main reason why dietitians recommend to consume 60 percent of animal protein and 40 percent of vegetable analogue from the daily ration.

No vitamins and mineral substances are of any use if our organism does not receive animal protein. Like vegetable protein, they can not be digested without animal protein.

Vegetarians, especially those of advanced age, usually face numerous health problems that are mainly caused with the shortage of animal protein. After two months of no-meat diet, the quantity of protein in the cardiac muscle decreases four times, which triggers the development of heart failure. The work of all other organs worsens soon after. A vegetarian man or woman may find themselves on the brink of dystrophy.

First signs of dystrophy are not that evident and burdensome, but the resulting effect may lead to lamentable consequences. Have you ever seen starving African children on TV? Then you must remember those thin legs and swelled bellies, which dystrophy causes.

If you are going to have children, do not be in a hurry to join vegetarians. Many people think that such lifestyle produces rejuvenating effect which showing a positive effect on the reproduction function. However, reproduction depends on animal protein to a large extend. If a man does not receive irreplaceable amino acids with food, he can become infertile in perspective.

Furthermore, cosmetologists say that a typical vegetarian has dry and fragile hair, dull eyes and unhealthy complexion. They can hardly stand criticism and have a low boiling point. They raise their voice, swing their arms and splutter when arguing. They are weak even in their logic. They exemplify their righteousness with the cow, a herbivorous animal, and say that nature originally made a human being as a vegetarian creature.

Experts have recently put forward a hypothesis that can justify vegetarians. Scientists assert that there are people with irregular metabolism. They do not need animal protein at all. However, such people can be described as a mistake of nature. There are many of them, but most vegetarians are mistaken in their devotion according to this theory.

Of course, meat is heavy food, but nobody says that you should eat plenty of it. A person can eat at least 100g of meat (which is the size of a matchbox) a day to feel healthy.