Men can really breasfeed and have third nipple 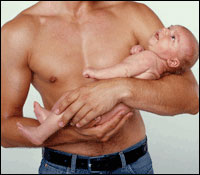 Men can really breasfeed and have third nipple

A death erection (sometimes referred to as “angel lust”) is a post-mortem erection which occurs when a male individual dies vertically or face-down. During life, the pumping of blood by the heart ensures a relatively even distribution around the blood vessels of the human body. Once this mechanism has ended, only the force of gravity acts upon the blood. As with any mass, the blood settles at the lowest point of the body and causes edema or swelling to occur; the discoloration caused by this is called lividity.

Alien hand syndrome (or Dr. Strangelove syndrome) is an unusual neurological disorder in which one of the sufferer’s hands seems to take on a life of its own. AHS is best documented in cases where a person has had the two hemispheres of their brain surgically separated, a procedure sometimes used to relieve the symptoms of extreme cases of epilepsy. It also occurs in some cases after other brain surgery, strokes, or infections.

The phenomenon of male lactation in humans has become more common in recent years due to the use of medications that stimulate a human male’s mammary glands. Male lactation is most commonly caused by hormonal treatments given to men suffering from prostate cancer. It is also possible for males (and females) to induce lactation through constant massage and simulated ’sucking’ of the nipple over a long period of time (months).

A supernumerary nipple (also known as a third nipple) is an additional nipple occurring in mammals including humans. Often mi staken for moles, supernumerary nipples are diagnosed at a rate of 2% in females, less in males. The nipples appear along the two vertical “milk lines” which start in the armpit on each side, run down through the typical nipples and end at the groin. They are classified into eight levels of completeness from a simple patch of hair to a milk-bearing breast in miniature.

5. Death on the toilet

There are many toilet-related injuries and some toilet-related deaths throughout history and in urban legends.In young boys, one of the most common causes of genital injury is when the toilet seat falls down while using the toilet.George II of Great Britain died on the toilet on 25 October 1760 from an aortic dissection. According to Horace Walpole’s memoirs, King George “rose as usual at six, and drank his chocolate; for all his actions were invariably methodic. A quarter after seven he went into a little closet. His German valet de chambre in waiting heard a noise, and running in, found the King dead on the floor.”