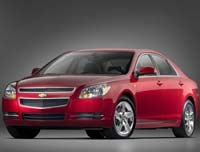 Interactive ads for the launch of the midsize family sedan — on sale Nov. 1 — were splashed across more than 50 high-traffic websites on Wednesday, including ESPN.com, Weather.com and Oprah.com, as well as on portal homepages including AOL and MSN. In addition, Chevy ran the ads on its own sites.

GM says the online "roadblock" (ad speak for buying ads across a medium's major outlets at the same time) was seen by about 80% of online users on Wednesday. The launch of the Malibu — a key entry for GM in the competitive category led by Toyota's Camry and Honda's Accord — also includes outdoor, print and TV ads.

"The objective is to get on people's radar screens," says Kim Kosak, Chevy's general director of advertising and sales promotion. "We're the underdog."

Kosak wouldn't reveal Chevy's ad budget for the launch but said Web spending, which will run at least through the first quarter of 2008, will be up to 25%.

That reflects the growing importance of Web marketing to car manufacturers. Not including what they spend for their own sites, automakers are expected to spend $2.5 billion on U.S. Internet ads this year, up 30% from 2006, according to eMarketer, usatoday.com reports

Making Web buzz crucial is that 70% of car shoppers now research the purchase online, according to J.D. Power and Associates. "Ten years ago, people used to go to dealerships about six times before they made a car decision," says Sandy Schadler, a digital strategist at Chevy ad agency Campbell-Ewald. With online homework, "that's reduced to about 1.7 times."

“The 2008 Malibu rewrites Chevrolet’s midsize car strategy, offering a stylish, uncompromising package that stacks up against the most popular competitors,” said Ed Peper, Chevrolet general manager. “We know the competition is very good, and this new Malibu has the goods – both tangible and intangible – to assert a leadership position in the segment and re-affirm Chevrolet’s commitment to expressive cars.”

The new Malibu is based on GM’s global midsize platform, which serves as the foundation for a strong body structure, precise build quality and refined driving dynamics. It is more than three inches (76 mm) longer than the current model, with a six-inch-longer (162 mm) wheelbase. These proportions create a wheels-at-the-corners stance that enables a smoother, more direct driving experience.