Nike on Tuesday unveiled what it said is the first shoe designed specifically for American Indians, an effort aiming at promoting physical fitness in a population with high obesity rates. 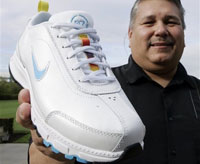 The Beaverton-based company says the Air Native N7 is designed with a larger fit for the distinct foot shape of American Indians, and has a culturally specific look. It will be distributed solely to American Indians; tribal wellness programs and tribal schools nationwide will be able to purchase the shoe at wholesale price and then pass it along to individuals, often at no cost.

"Nike is aware of the growing health issues facing Native Americans," said Sam McCracken, manager of Nike's Native American Business program. "We are stepping up our commitment ... to elevate the issue of Native American health and wellness."

Nike said it is the first time it has designed a shoe for a specific race or ethnicity. It said all profits from the sale of the shoe will be reinvested in health programs for tribal lands, where problems with obesity, diabetes and related conditions are near epidemic levels in some tribes.

Nike designers and researchers looked at the feet of more than 200 people from more than 70 tribes nationwide and found that in general, American Indians have a much wider and taller foot than the average shoe accommodates. The average shoe width of men and women measured was three width sizes larger than the standard Nike shoe.

As a result, the Air Native is wider with a larger toe box. The shoe has fewer seams for irritation and a thicker sock liner for comfort.

Jerry Bread, outreach coordinator for the Native American Studies program at University of Oklahoma, said the idea was "fantastic" and addressed a core issue for tribes, though he was skeptical that the feet of people from so many tribes could be so similar.

"It's an excellent gesture and I know it will get a lot of support from tribal people," Bread said. "We stand to profit from it in our physical health and well being."

The design features several "heritage callouts" as one product manager described it, including sunrise to sunset to sunrise patterns on the tongue and heel of the shoe. Feather designs adorn the inside and stars are on the sole to represent the night sky.

The company anticipates selling at least 10,000 pairs and raising $200,000 for tribal programs. At $42.80 wholesale, it represents less of a financial opportunity than a goodwill and branding effort, the AP reports.