China may lead US economy to collapse dumping US dollar

The U.S. dollar is standing at the edge of a cliff, and most people don’t even know it. 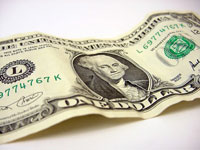 China may lead US economy to collapse dumping US dollar

Data released by the New York Federal Reserve shows that foreign central banks have been net sellers of U.S. treasuries over the past five weeks, with $48 billion having been sold since late July, and $32 billion in just the last two weeks.

The reduction in treasuries “comes as a big surprise and it is definitely worrying,” said Hans Redeker, foreign exchange strategy chief at bnp Paribas, one of Europe’s biggest banks.

The Telegraph reported that, according to Redeker, the numbers demonstrate “that world central banks are in a hurry to get out of the U.S.”

The danger, as the Telegraph notes, relates to the fact that China holds such a large amount of treasuries. Any confirmed evidence that China was no longer supporting the dollar, and was actually selling it, risks setting off “an unstoppable stampede” in which other nations would seek to dump their holdings before China swamps the market and demand for dollars is overwhelmed.

The implications of a run on the dollar due to Chinese treasury-dumping go far beyond just the value of the greenback.

Chinese demand for treasuries is one of the primary pillars supporting the dollar’s value. When China buys treasuries, it keeps the dollar strong, interest rates low, Chinese imports inexpensive, and consumers spending.Remove that pillar, and the whole U.S. economy is thrown into jeopardy.

The Trumpet has warned not only against the danger of relying on foreign creditors, but also that deteriorating economic conditions in general are frighteningly imminent. Even if China has not decided to dump the dollar yet, America’s massive and growing debt loads, huge trade deficit, ballooning government entitlement spending and corruption-plagued financial system based upon a precarious fiat currency mean that the dollar is certain to drop further in value.

The United States received the first crucial evidence that the tumbling housing market and a vicious credit crunch may be pushing it toward recession after figures showed it shed 4,000 jobs in August -- its first outright decline in four years.

The stunning number -- economists were forecasting a 100,000 gain -- coupled with downward revisions to previous months, sent stock markets reeling and the U.S. greenback to a 15-year low against major currencies, and raised speculation the U.S. Federal Reserve may chop interest rates 50 basis points instead of 25 at its Sept. 18 meeting.

And while Canada released solid jobs numbers yesterday, holding out hope the economy will resist a U.S. slowdown, analysts saw some chinks in the report. At least one economist is calling for a rate cut north of the border as the global credit crunch weighs on growth.

"The [U.S.] jobs data ... is simply horrific and fans the most pessimistic fears -- the housing market woes will undermine the U.S. consumer, push the U.S. economy into recession and drag down growth in much of the rest of the world," said Marc Chandler, foreign-exchange strategist at Brown Brothers Harriman in New York. "A 25-basis-point cut now would be disappointing. The Fed needs to get ahead of the proverbial curve."

The U.S. dollar index, which measures the greenback against a basket of currencies, fell to its lowest level in 15 years while investors fled to the safe haven of gold and U.S. treasuries. U.S. interest-rate futures priced in a 76% chance the Fed would drop interest rates to 4.75% from its current 5.25% setting, compared with 42% odds yesterday.

While the United States managed to hold its unemployment rate steady at 4.6%, details of the payroll report were poor with manufacturers, builders and even the government shedding jobs.

What's more, the trend is clearly weakening. Employers added only 44,000 to their payrolls on average over the past three months, compared with 147,000 in the first five months of the year and 189,000 in 2006, the Financial Post reports.