Tajikistan, an Asian republic of the former Soviet Union, decided to cancel a contract with the Russian company Rusal for completion of a giant hydroelectric power plant. The project was seen s a substantial boon to the impoverished country in Central Asia. 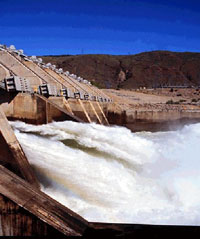 Tajikistan and Rusal signed a $1 billion contract in 2004 for completion of the Rogun project that is to include the world's highest dam. The project was begun when Tajikistan was part of the Soviet Union, but stalled in the economic chaos that followed the collapse of the USSR.

But the contract became mired in disputes between Tajikistan and Rusal, including over the size of the dam, the materials used in it and how much of the electricity generated by the project would be sold to Rusal's energy-hungry aluminum plants.

The office of President Emomali Rakhmon, which announced cancellation of the contract, said the government has decided to create an open-stock company to undertake completion of the project. A Rusal representative in Tajikistan, Konstantin Zagrebelny, said he had not been informed of the decision and could not comment.

The country's fast-flowing mountain rivers have a potential hydropower capacity of 527 billion kilowatt hours a year, among the largest in the world, according to international experts. Energy sales would bring a substantial boon to the former Soviet republic, racked by rampant unemployment and problems caused by increasing amounts of drugs being smuggled from neighboring Afghanistan.

The plant's completion could substantially increase sales of electricity to neighboring China, as well as to Pakistan and Afghanistan.

The Rogun project, designed in 1976, was the biggest of several that Soviet planners had in mind for Tajikistan. Workers had built the dam on the Vakhsh River, about 74 miles (23 meters) east of the capital, Dushanbe, up to 40 meters (131 feet) high when funding ran dry in 1992. While the Moscow-backed secular government and Islamic opposition were fighting a civil war, flooding washed away the dam.

Rusal wanted to build a 280-meter (918-foot) concrete dam to generate electricity primarily for its own use. The government wants the dam to be 55 meters (180 feet) higher and built out of earth and rock, just as the original Soviet plans specified, saying that would be safer and generate more electricity.