McDonald's Corp. on Friday posted its largest monthly comparable-store sales increase in more than three years, helped by the popularity of its small sandwiches in France and a big green ogre called Shrek in the United States. 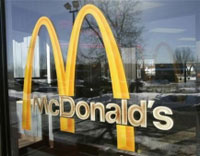 Wall Street analysts had been expecting a rise of 5 percent, according to research notes.

The sales increase was the largest since April 2004 and continues the strong showing by McDonald's, which has focused on new products such as entree salads and chicken snacks to help emerge from a slump earlier this decade.

"I suspect at some point the growth will have to slow; I'm not sure I would expect it any time in the near future though," said Janna Sampson, director of portfolio management at Oakbrook Investments in Lisle, Illinois, which holds about 680,000 McDonald's shares.

Same-store sales, a key retail measure, rose 7.4 percent in the United States, helped by a promotional tie in with the DreamWorks movie "Shrek the Third" and continued strength in its breakfast business.

Same-store sales rose 8.9 percent in Europe, boosted by chicken snack wraps and other items in Germany and P'tit Plaisir sandwiches in France -- a line of smaller beef and chicken sandwiches, Reuters reports.

They stock has advanced 53 percent in the past 12 months, outpacing a gain of 30 percent at Yum! Brands Inc., the owner of Taco Bell and KFC.

“McDonald's continues to execute across the globe,'' Larry Miller, an Atlanta-based analyst at RBC Capital Markets Corp., wrote in a note June 6. He rates the shares “sector perform.”

Global sales last month increased the most since a jump of 10.5 percent in April 2004, McDonald's spokeswoman Heidi Barker said. The company is based in Oak Brook, Illinois.

U.S. sales rose on the introduction of cinnamon rolls and iced coffee. The “Shrek” tie-in resulted in a “significant spike” in sales on demand for promotional drinking glasses and kids' meals with chicken McNuggets, said Barker.

The company is testing sweet iced tea and burgers with Angus beef among an increasing number of items that may be introduced in the next two years, U.S. President Don Thompson told reporters after the annual meeting at McDonald's headquarters last month.

Sales growth has accelerated this year on new desserts in Europe and iced lattes in the U.S., where the company is trying to take customers from Starbucks Corp., Bloomberg reports.