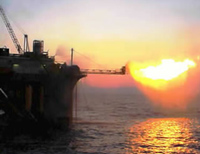 The already announced Puguang field accounted for over half of 600 bcm of reserves Xinhua said were discovered in a basin that could hold up to 3.8 trillion cubic metres of natural gas.

The country's two biggest energy firms PetroChina and Sinopec will develop the gas fields and production is expected to reach 74 million cubic metres per day by 2010.

The basin sits between the major western cities of Wuhan, Chongqing, Chengdu and Xian, the report added, which should help secure a market for the gas. Some will be used as feedstock for local petrochemical plants.

Beijing has been pushing domestic upstream efforts because officials want to increase the use of clean-burning natural gas but are reluctant to pay rising international prices.

Sinopec has said it expects its Puguang gas field to have capacity to pump 15 bcm of gas annually by 2009, equivalent to a quarter of last year's national output.

The company is investing 63.2 billion yuan in developing the field and building a pipeline to carry its gas to the booming east coast, and has already signed up a first tranche of customers around the country's financial capital, Reuters reports.

The government has strengthened exploration efforts in a bid to feed the country's brisk economic expansion that has seen double-digit growth for four consecutive years.

Last week, a large gas field with reserves of nearly 30 billion cubic metres was discovered in Karamay in the Xinjiang region in the northwest.

A major oil field, the Jidong Nanpu oil field in Bohai Bay in the north, has also been announced recently.

The oil field is the largest discovery in the country in more than four decades, with expected reserves reaching one billion tonnes or about 7.35 billion barrels, the AFP reports.