The euro-area economy expanded by 3.1 percent in the first quarter, slowing slightly after a record growth spurt at the end of last year, the EU statistical agency Eurostat said Tuesday. 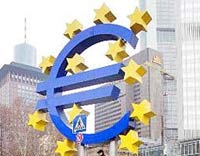 The 13-nation euro zone grew 3.3 percent in the last three months of 2006, its fastest rate since 2000, as Europeans started spending again after several years of little economic growth.

Quarter-on-quarter, the euro-zone economy expanded 0.6 percent in the three months ending March 31, Eurostat said in a first estimate that must be confirmed when it has more information on all euro nations.

The European Commission said separately Tuesday that it expected growth to remain strong in the second and third quarters before slowing in the final three months of the year.

Germany, the EU's largest economy, braked in the first quarter but not as much as expected as some shoppers kept wallets shut after the Jan. 1 introduction of a higher sales tax. It grew half a percent from the previous quarter after rising 1 percent in the final three months of 2006.

France also grew 0.5 percent, the same as the previous quarter. Italy slowed more dramatically, growing 0.2 percent after an unusually fast 1.1 percent at the end of last year. Spain slowed only slightly to 1 percent.

It compared this with the U.S. year-on-year growth rate of 2.1 percent, the AP reports.

Faster-than-expected economic growth in Europe is increasing concern at the ECB that inflation may accelerate later this year. Trichet signaled last week he will raise interest rates next month for the eighth time since late 2005 to keep price increases in check.

Inflation in the euro area slowed to 1.8 percent in April, the eighth month the inflation rate stayed below the ECB's 2 percent limit. Still, the European Commission last week raised its 2007 inflation forecast to 1.9 percent from 1.8 percent.

“ Taking into account both short-term factors and underlying strength of money and credit, there are clear upside risks to price stability,'' the ECB's Trichet said May 10. While euro-area inflation is forecast to be below the ECB ceiling this year for the first time since 1999, the central bank forecasts an acceleration to about 2 percent next year.

Investors expect the ECB will raise its benchmark rate again after an increase to 4 percent in June, futures trading shows. The yield on the three-month Euribor futures contract for December was at 4.36 percent today.

The contracts settle to the three-month inter-bank offered rate for the euro, which has averaged 16 basis points more than the ECB's benchmark rate since the currency's start in 1999, Bloomberg reports.