Online sales of apparel, accessories and footwear reached $18.3 billion last year and should hit $22.1 billion this year, according to the Shop.org survey conducted by Internet research firm Forrester Research. Shop.org is the online arm of National Retail Federation, the retail industry trade group. 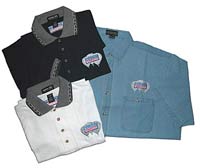 Meanwhile, computer hardware and software, long the leader for nontravel online sales, moved into second place last year, at $17.2 billion. That was followed by sales of autos and auto parts, whose sales reached $16.7 billion, and home furnishings, which posted sales of $10 billion. Computer peripherals, which reached $1.5 billion in sales last year, were not included in the hardware and software category.

The figures were based on responses from 170 online retailers as well as an analysis of industry data.

"This is a real milestone in the industry," said Scott Silverman, executive director of Shop.org, noting that the popularity of apparel online is now in line with what's happening on land. "We have really gone mainstream."

Silverman and Sucharita Mulpuru, senior analyst and lead author of the report, noted that new technology that mimics shopping at physical stores such as the ability to mix and match clothing and zoom in on a pattern has faciliated online shopping. Furthermore, a growing number of apparel sites are now adding customer reviews, which help shoppers in their decision making.

A bevy of new shoe sites like piperlime.com, which offers free shipping on returns, is also providing a boost to the online footwear business.

The study reported that 10 percent of all clothing, accessories and footwear sales are expected to occur online this year, up from 8 percent last year. And overall online retail sales excluding travel should account for 7 percent of the total retail market in 2007, up from 6 percent, the AP reports.

Despite ample room for growth, annual growth rates of more than 20 percent will not last, said Silverman. The industry is expected to reap sales of $259 billion in 2007, he said, representing an 18 percent gain over 2006.

"At some point it's going to have to slow down," Silverman said. "Online retail is now in its 13th or 14th year, it's beginning to mature."

But while growth rates might be decelerating, retailers are still in the early stages of recognizing the positive impact a sophisticated online strategy can deliver, he said.

"Retailers are just beginning to see what that potential is," Silverman said. "But a lot of them are fairly far behind in terms of having an appropriate investment level to take advantage of that opportunity."

One leader in investment has been Amazon.com, which has been upgrading its systems and adding new features to its Web site to enhance the online experience. Wall Street has been critical of a 47 percent rise in spending on technology and content in 2006, but Amazon claims that investments will pay off in the long run due to the loyalty of consumers.

But it is not quite time to shutter that brick-and-mortar store. The online retail industry still only accounts for 7 percent of total retail sales, excluding travel. But certain categories represent a much higher percentage, like computers, where online sales make up 44 percent of the total, Reuters reports.