Microsoft Corp. says it has acquired a minority stake in job-listings partner CareerBuilder.com, and will use that job-search engine on MSN sites overseas, in a bid to capture more of the classified advertising money migrating to the Web. 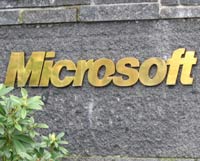 Reston, Va.-based CareerBuilder has been the exclusive provider of job listings to Microsoft's MSN Careers site since 2004. The job site's newspaper industry majority owners use CareerBuilder's technology for their own online classifieds, and have benefited from the site's U.S. growth as print classified advertising revenue plunged in recent years.

Microsoft declined Wednesday to say how much it paid for a 4 percent stake. CareerBuilder said newspaper publishers Gannett Co. Inc. and Tribune Co. each hold 40.8 percent of the company, and McClatchy Co. now holds 14.4 percent.

Microsoft's move from partner to owner is the latest development in a series of linkups between newspaper businesses and the most powerful Web companies, as both industries fight for the growing pool of ad dollars shifting to the Internet.

More than 260 U.S. newspapers, including those owned by McClatchy, the nation's third-biggest publisher based on circulation, have signed on with Yahoo Inc. to sell advertising online, including employment classifieds. Google Inc. has also been working with some of the nation's largest newspapers to broker print advertising, seattlepi.com reports.

CareerBuilder competes directly with other employment sites like Monster.com and HotJobs on Yahoo, which itself has a partnership with a consortium representing more than 260 newspaper Web sites.

The deal potentially heightens the rivalry between MSN and Yahoo, two of the leading Internet portals, which compete to attract users with news and entertainment content, as well as e-mail, instant messaging and other offerings. Yahoo recently announced a deal with publishers representing 264 newspapers, including McClatchy, to sell national advertising across their Web sites.

Despite the rivalry, Yahoo and Microsoft executives came together here on Wednesday amid high expectations that the companies might announce some kind of partnership.

But as Terry S. Semel, chief executive of Yahoo, addressed representatives of hundreds of marketers and advertising agencies at a conference convened by Microsoft, and later sat down for an onstage conversation with Joanne K. Bradford, chief media officer for MSN, there was not a single reference to a possible deal.

Instead, the talk was all about the forces that are shaping the online advertising industry: international expansion, mobile devices and interactive video.

Mr. Semel did make the obligatory dig at Google, which is outflanking both Microsoft and Yahoo in online advertising.

Referring to the video-sharing site acquired last year by Google, Mr. Semel said that either Microsoft or Yahoo could have chosen to build “YouTube look-alike” sites that disregarded copyrights. Instead, he said, both companies chose to be partners with Hollywood studios and television networks.

Unlike many of the other speakers at the two-day event, Mr. Semel took no questions from the audience, the New York Times reports.