South Korea and the European Union kicked off their first round of free trade talks Monday, while protesters denounced the effort as a threat to local jobs and livelihoods. 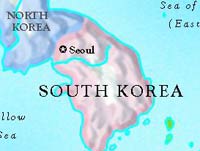 Chief negotiators Kim Han-soo for South Korea and Ignacio Garcia Bercero for the EU smiled and shook hands across a table at the Seoul hotel where they and their teams will meet for five days.

The effort by South Korea and the 27-member EU comes amid a flurry of bilateral free trade agreements and negotiations as talks toward a new multilateral global trade pact continue to flounder.

South Korea reached a landmark deal last month with the United States and has concluded other agreements as well, including a group accord with nine of the 10 members of the Association of Southeast Asian Nations.

Seoul is also hammering out a deal with Canada and has expressed interest in striking one with China. Negotiations with neighboring Japan, however, have been suspended amid bickering over agriculture.

Last week, the EU and ASEAN said they have agreed to start free trade talks, the AP reports.

EU Trade Commissioner Peter Mandelson, speaking at the same news conference, said Brussels would focus on the auto sector, which is widely seen as heavily protected by South Korea, itself a major car exporter.

Close to 19 percent of South Korea exports to the EU are vehicles.

"I take pride in every European car which I see on the streets of Seoul but I would like to see a great many more," Mandelson said.

The first round of official negotiations will be from May 7-11 in Seoul. South Korean officials have said they hope to wrap up the talks within a year.

Unlike in negotiations with the United States, there is little pressure from Brussels for South Korea to open up its tightly defended agriculture sector. U.S. pressure to open up that market to imports triggered widespread and often violent protests in South Korea.

Last month, the EU estimated its exports could rise by $54.36 billion a year if the bloc reaches planned new free trade agreements with Asian countries such as South Korea, Reuters reports.