The nation's manufacturing sector showed surprising strength in April, growing at a faster-than-expected pace and pushing up prices for fuel, metals and corn-based products. 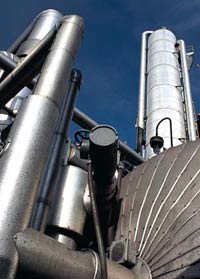 That today from the Institute for Supply Management, based in Tempe, Ariz., said its manufacturing index registered 54.7, above the March reading of 50.9 and Wall Street's expectation of 51. It was the highest reading in 11 months, when it also registered 54.7.

A sharp spike in the prices paid index fueled ongoing concerns over inflation and interest rates, however.

The prices paid index surged to 73 in April, compared to 65.5 the previous month. Prices rose for commodities including gasoline, aluminum, corn, diesel fuel and steel. No commodities fell in price, the report said.

The prices paid index reached 78.5 in July of last year, but had fallen to 47.5 by December.

"So it's quite a sharp change," said Nigel Gault, economist with Global Insight.

Even though the U.S. economy has been fairly sluggish, the steep climb in prices shows the global economy is still holding up well and that manufacturers are facing steeper costs, Gault said. Higher fuel prices also contributed to the spike.

"The question always is, to what extent do higher prices paid get passed on to the consumer? And how does that affect the inflation numbers the Fed is looking at?" Gault said.

The Federal Reserve, which meets May 9, is expected to keep interest rates unchanged as it has of late, reflecting various comments from Fed Chairman Ben Bernanke and his colleagues that their primary worry remains the threat that the slowing economy will not cause inflation to moderate.

The overall economy grew for the 66th consecutive month, driven by new orders, production and employment.

The ISM's manufacturing sector index has bounced above and below the break-even point of 50 for several months, an indication of the overall economy's uncertain path. It showed contraction in November, rebounded in December, fell back again in January, then expanded modestly in February and in March, the AP reports.

Gross domestic product rose at a 1.3 percent annual rate in the first quarter, the slowest pace in four years. A gain in consumer spending helped prevent the expansion from slowing even more.

Business investment dropped for the first time in almost four years at the end of 2006 and rose at a 2 percent annual rate in the first three months of this year, the Commerce Department reported last week. The increase last quarter was less than one third the average 6.6 percent gain over the last three years.

“On the housing side, it's bottomed out,” Liveris said in An April 26 interview. “It won't get any worse and it's got an opportunity as the year goes by to get better.”

The same is true of U.S. auto production, he said.

“I see more trend positive than trend negative” in the U.S. economy, he said.