Russia's biggest domestic carrier signed a deal with Boeing Co. to expand its charter division with up to 20 new 737-800 aircraft. 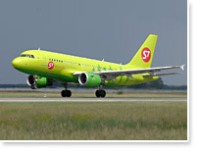 S7 will receive 10 aircraft between 2010 and 2011 under an operating lease agreement and has rights to purchase 10 more, spokeswoman Yulia Nemtsova said.

She declined to provide financial details of the contract, but the planes command a catalog price of US$705 million (EUR519 million).

"This large contract with Boeing is a major event for us and allows us to look with optimism at resolving one of S7's most important tasks creating a new, modern fleet in the next seven years," company general director Vladislav Filyov said in a statement.

The order is a bright spot for Boeing Co. in Russia. The U.S. plane manufacturer's efforts to reach a major deal with Aeroflot have been stymied by what some analysts say is the chill in relations between Washington and Moscow.