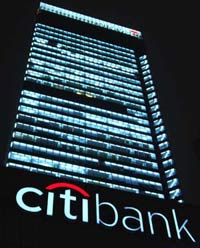 In an all-cash deal, Citigroup will pay NT$11.8 (36 US cents) a share to acquire the Bank of Overseas Chinese. The deal, which was under negotiation for nearly a year, is expected to be completed in the second half of 2007.

The final price is "subject to certain pre-closing adjustments," according to a joint statement issued by Citigroup and the Bank of Overseas Chinese.

After the acquisition, the two banks will have total assets of US$22.8 billion (euro17 billion) and 66 branches on Taiwan. The Taiwanese bank's 55 branches on the island will change their names to Citibank. Citigroup has 11 branches in Taiwan, the AP reports.

Foreign banks also like Taiwan banks' valuations, which are among the lowest in the greater China region following a consumer credit crisis that put many players into losses, analysts said.

Citigroup paid three times 2007 price to book for BOOC, said Nora Hou, an analyst at Nomura Securities, adding: "Citi is anxious to close the deal as BOOC is probably the only Taiwan lender willing to give up its management control."

Citigroup previously acquired, and later sold, a 15 percent stake in the banking arm of Taiwan's Fubon Financial, reportedly abandoning the investment due to control issues.

Citigroup said it will set up a subsidiary to buy BOOC, with completion set for the second half of this year. The deal is subject to Taiwan and U.S. regulatory approval, Reuters reports.

In 2000, Citigroup paid NT$23 billion for 15 percent of Taiwan's Fubon Group, now known as Fubon Financial Holding Co. It began selling down the holding in 2004, saying it wanted to pursue its own strategy, and now has 11 branches on the island.

Citigroup is trying to expand consumer banking in Taiwan to compete with overseas rivals including Standard Chartered Plc. That London-based bank announced an NT$40.5 billion acquisition of Hsinchu International Bank in September, the first overseas buyout of a Taiwanese bank.

Citigroup is expanding in Taiwan as the banking industry recovers from a bad-debt crisis, helped by an economy that grew 4.6 percent last year. Sour credit-card loans that cost banks $6.6 billion in write-offs in 2005 and eroded economic growth were predicted to peak by the third quarter last year, Bloomberg reports.