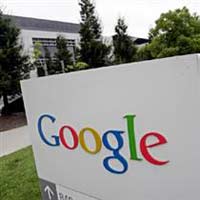 Last week, the Journal reported that DoubleClick was exploring a sale with the help of investment bank Morgan Stanley and was in active talks with several companies. Microsoft was reported to be interested in buying the online advertising company for up to $2 billion.

The newspaper, citing unnamed people familiar with the situation, said Monday that Google has emerged as a contender, and Yahoo Inc. and Time Warner Inc.'s AOL division also have talked to DoubleClick, which is owned by San Francisco private-equity group Hellman & Friedman. Negotiations were fluid, and a winner could be declared within days, the report said.

New York-based DoubleClick has about 2,000 clients, spanning advertising agencies, Web publishers and advertisers. The company helps its customers place and track online advertising, including search ads, which Google -- more than its nearest search competitors Yahoo and Microsoft -- has turned into an extremely lucrative business, the AP reports.

Microsoft declined to comment on its potential interest in DoubleClick, as did Hellman & Friedman.

Yahoo is always talking to a number of companies, but it doesn't discuss those talks, spokeswoman Helena Maus said.

Representatives from Google and DoubleClick did not immediately return calls seeking comment.

DoubleClick's value may be on the rise, too. BusinessWeek.com has learned the firm is poised to unveil a new advertising exchange. Currently, DoubleClick delivers and tracks ads on sites with which the advertiser has an existing deal. As an exchange, DoubleClick would facilitate deals between publishers and advertisers that have not yet worked together. So, say, a toy seller on DoubleClick's site looking to reach out to former online customers could buy space on a parenting site that, at that moment, is being visited by a user who recently visited the toy seller's site.

In the hands of a search engine, such a capability could become even more powerful. Search engines have data on the queries performed on their site and can deliver ads next to search results. But they can't deliver ads when the user who performed the search leaves their network of sites. With an exchange, the search engine could potentially buy space on other sites where their users go, serving ads on the fly as their users appear. The search engine would be able to extend their reach and add value for their own advertisers, BusinessWeek.com reports.