The majority of Russians prefer to stay away from the police 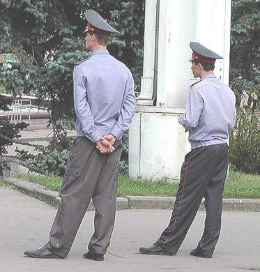 In general, Russians are highly apprehensive of law enforcement structures. 72.5 per cent of respondents said either close people or themselves could fall victims of the police despotism.

Opinion polls reveal that majority of the population believe that authorities systematically employ the police as a mechanism to fight its political opponents. According to recent researches, 12 per cent of Russians think this happens regularly, 36.7 per cent say it happens often and only 6.4 percent of Russians say it never happens at all.

As based upon such results obtained during regular opinion polls, Yury Levada's Analytical Center defines the index of the police despotism - the index indicating what people think about their protection from illegal doings of the police, prosecutor's office and courts.

Sociologists state that the index will make up +25.7 for the next month (it made up +31.9 in February 2005). The drop in the index demonstrates that people are now less apprehensive of the police and trust law enforcement agencies more.