The Moscow Healthcare Department purchased more than 50 devices and hundred of thousands of test systems for SARS-CoV-2 coronavirus from a company called Medpromresurs. This sounds like good news, if it was not for the dodgy reputation of the company. Thieving businessmen are trying to cash in on the disease that their compatriots suffer from while keeping an eye on the funds from the state budget too. US funded Radio Liberty investigated the Moscow's purchase, that got links to 2019 scandal in Tatarstan. 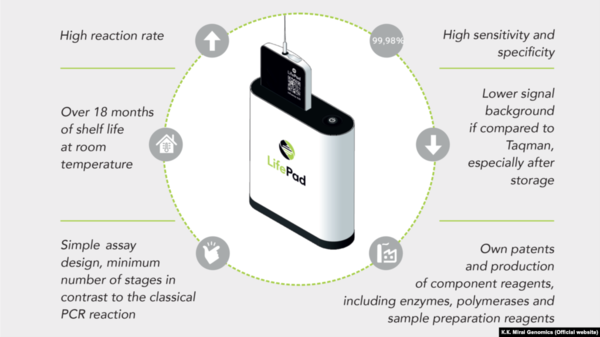 Screenshot from the site of Japanese company K.K. Mirai Genomics

The story began in September 2019. During the Eastern Economic Forum, which was held last autumn, a little-known Japanese company K.K. Mirai Genomics promised to invest 2.5 billion rubles ($30 million) in the production of a diagnostic system for infectious diseases in the Republic of Tatarstan. The systems were supposed to be subsequently acquired at the expense of mandatory medical insurance - the state budget that is. Russian company PharmMedPolis-RT acted as a partner on the Russian side. Taliya Minullina, the head of the Agency for Investment Development of the Republic, put her signature on the agreement for the production of biochips for the diagnosis of influenza. The story was highlighted by a lot of Russian media for its connection to corruption and money-laundering issues. The chips were allegedly patented in Europe, the USA and Japan (coronavirus was nowhere near back then). Strangely enough, the supposedly patented trademark for the LifeRing molecular diagnostic system that consists of disposable chips is not manufactured in any of the above-mentioned countries. Moreover, as the Versia found out, the company's offices in Japan and the United States are located in cheap Class B office buildings, which does not go along with the promise to invest 2.5 billion, because a company like that simply does not have that much money.

However, methods for rapid diagnosis of influenza are not just being developed in our country - they are already in practical use. Moreover, the time that is required for testing biomaterial is even shorter in comparison with the time period that foreign-made chips need for the same purpose.

K.K. Mirai Genomics was a very little-known company indeed: it did not even have a website at the time when the deal was signed. Mirai never provided any specifications and descriptions of the technology, nor did it say anything about the results of clinical trials. Such facts did not stop the authorities of Tatarstan, though.

A few days ago, during a meeting with government members regarding the coronavirus crisis, Vladimir Putin cheerfully announced:

"The Russian Direct Investment Fund will finance cooperative developments with Japanese partners in order to launch the production of expresstest systems in April. Potentially, this will be the first portable rapid test in the world."

Even though the president did not name the Japanese company, we know that it goes about K.K. Mirai Genomics. The Russian Direct Investment Fund published a press release on its website about the investments made in Medpromresurs "with a partner - K.K. Mirai Genomics." It remains unclear how that could happen. The topic of fraudulent activities was vigorously raised in the Russian media again, although this time it goes about the pandemic and fraudulent operations with coronavirus test systems.

One of the reasons for such conclusions was the website of K.K. Mirai Genomics. The website was launched shortly before the company became a partner of the largest state-owned RDIF fund, which manages public funds worth more than $10 billion. The website of Japanese company K.K. Mirai Genomics looks like a real scam indeed. Firstly, as Sobesednik journalists found out, the website is registered and hosted in Russia. All photos that can be found on the website of K.K. Mirai Genomics were taken from public photo banks, while the site itself was created with the help of a site-building service. There is no useful information on the site either: one cannot find either a description of technology or clinical studies there - nothing at all. It is just a typical business site in English, poorly written and poorly designed. Nevertheless, it is the website of the company that Vladimir Putin spoke about. 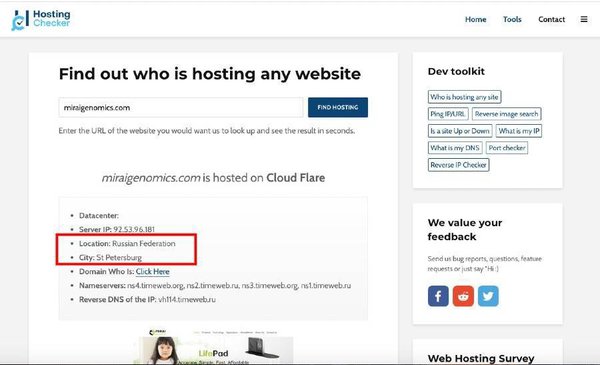 Moscow buys tests with a price tag of 1,500 rubles, but the supplier says that he has a contract with the alleged developer of these tests, the Kazan-based company SmartLifeKea. However, this company does not appear on the list of the Foundation for Innovative New Diagnostics (FIND) of global suppliers of COVID-19 test systems, although Russian developers do appear there (although there is not a single one from Kazan). The list contains information about nearly 200 companies, mainly from China, which today produce much-needed test-systems for diagnostic detection of coronavirus. Their cost varies, but one could simply purchase COVID-19 test systems for Moscow at 3 euros apiece (260 rubles), rather than manufacture them. In other words, the profit from speculative operations could amount to nearly 125 million only for 100,000 kits.

The only founder and director of Smart LifeKea, a company without employees, is Ramil Zainullin, who, for the implementation of the joint project between Eidos-Dnafrom JSC (which he co-owns) and Japanese research institute RIKEN to design new DNA diagnostics apparatus, attracted PharmMedPolis-RT - the company that signed the contrast with  K.K. Mirai Genomics of Japan at the Eastern Economic Forum.

A half of shares of PharmMedPolis-RT LLC, which signed the agreement with the Japanese, belongs to Ramil Khabriev - the former Minister of Health of the Republic of Tatarstan, Deputy Director of the Department for Social Development of the Federal Government. A while back, the head of RUSADA, the Russian anti-doping agency, had had his reputation stained as a result of the doping scandal that barred Russian athletes from the Olympics. Currently, Khabriev heads the National Research Institute of Public Health named after N.A. Semashko.

The other half of the shares of PharmMedPolis-RT belongs to the chairman of the board of directors of the company, Rustem Magdeev, who is suspected of having ties with the organized crime group, called Sevastopols'. His persona attracted a lot of attention in the criminal case of the Kazan-based Design Bureau named after Simonov, as well as in connection with the arrest of its CEO and chief engineer Alexander Gomzin, and a high-profile trial with his former partner Dmitry Tsvetkov at the UK Court of Arbitration in connection with the Cypriot franchise of Graff jewelry boutique.

Rustem Magdeev is a well-known businessman in Tatarstan who has an extremely unsavory reputation. We have reported before about the machinations that he resorted to in order to achieve his goals. This time, Magdeev set his sights on the state medical insurance budget in connection with the pandemic. Apparently, Magdeev has no moral doubts that could tear him apart. An investigation conducted by of Radio Liberty, an organization that is funded by the US State Department, revealed that it was Rustem Magdeev, who masterminded the procurement of coronavirus test systems for Moscow, using affiliated intermediary company Medpromresurs. The Sobesednik newspaper believes that Magdeev acts in the interests of his former boss - Rustam Minnikhanov, the President of Tatarstan. If true, then the scope of the affair deems unprecedented even for Russia, because it is not only regional leader Minnikhanov, who is involved in it, but also the largest state-owned RDIF fund, and even Vladimir Putin himself, who was misinformed about the Japanese technology. Such technology does exist, though. Hundreds of laboratories and pharmaceutical companies around the world already manufacture coronavirus test systems. It is hard to believe, though, that K.K. Mirai Genomics, a company that is literally known for nothing, can have such technology at its disposal. It appears that Mirai Genomics is a boguscompany for Russian businessmen, whose goal is to profit from the Russian healthcare system. Last year, the matter was about diagnostic chips, but it is coronavirus that has been the talk of the town lately.

Russia already has something to be proud of under the conditions of the pandemic: Russian doctors work in Italy, where the epidemic went out of control. It is especially unpleasant against this background that Russia, in the face of President Vladimir Putin, may find himself involved inan international scandal based on coronavirus test systems fraud and fake companies created for the purpose of profit withdrawal, although that money could be used to contain the pandemic in the midst of such a severe crisis.