Notorious Russian entrepreneur sells his bakery shops because of 'sodomites'

Moscow entrepreneur German Sterligov, the owner of a chain of expensive bakery shops "Khleb and Salt" (translates as "Bread and Salt") decided to sell his shops on account of "oppression" on the part of the Office of the Public Prosecutor. The latter demanded Sterligov should make his bakeries open to absolutely all customers, regardless of their sexual orientation. 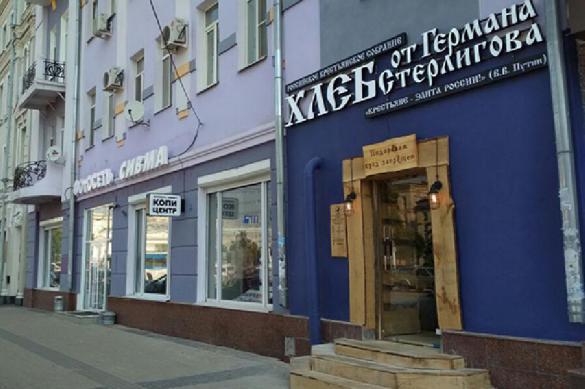 Not that long ago, German Sterligov became known for his publicity stunt, when he ordered to install infamous anti-gay signs on the doors and windows of his shops denying entry to homosexual individuals. The insciption on the wooden signs, carved in the traditional Russian style, was made in a highly offensive language saying: "No fags admitted here." To crown it all, it was up to a salesperson to decide whether a customer is a homosexual or not.

Sterligov wrote on his social media account that one of the shops in the center of Moscow was already closed.

"They offered me a choice: save either business or conscience. I chose conscience," the entrepreneur wrote.

Earlier, Sterligov agreed to comply with requirements from the Office of the Public Prosecutor and changed the offensive word in his shop signs to "sodomites." However, he was surprised to find out that prosecutors demanded not only words, but also action from the entrepreneur: Sterligov was ordered to make his shops available to all customers, regardless of their sexual orientation.

Sterligov firmly stated that his shops would not serve "dirty perverts," "because we are Christians." That is why one of the shops of the chain has already been closed, and other shops will most likely close too during prosecutor inspections.

"So there: we better give up income and close shops in Moscow, but there will be no services provided to fags in Sterligov shops!" the entrepreneur declared resolutely.

Sterligov promised to resume his business as soon as "the influence of people with non-traditional orientation in certain Moscow government agencies will come to naught."

Sterligov hopes to sell six bakery shops in the center of Moscow for 600,000 dollars. According to his calculations, the deal should pay off in a year.

It is worthy of note that this is not the first scandalous "exodus" of the former multimillionaire. Two years ago, German Sterligov suddenly decided to leave Russia, having found refuge in Nagorno-Karabakh. He sold his Sloboda (large industrial village) and his fleet of motor vehicles.

His decision to leave Russia was connected with the trial on the case of the murder of lawyer Stanislav Markelov and journalist Anastasia Baburova by members of BORN ultranationalist group. A member of the group, Nikita Tikhonov, sentenced to life imprisonment, said that the territories belonging to Herman Sterligov were used for physical training of members of banned nationalist organisations.