World currency war: All against all

The stock market, the banking and financial sectors are detached from real economy. Is the world standing on the brink of the financial abyss? Expert in exchange trading, Vasily Oleynik, shared his views with Pravda.Ru about the fact why no president of the United States of America can save the country from the economic crisis. 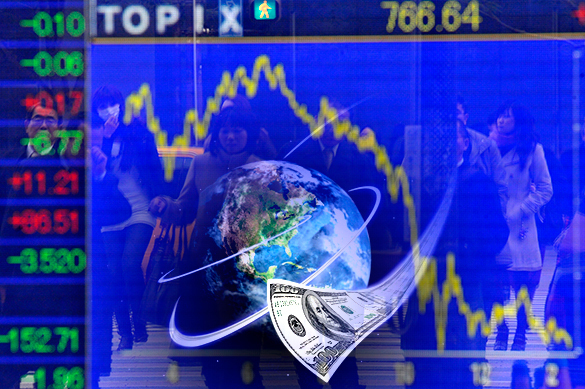 "You are known for your alarmist predictions. When you talk about the threat of the global financial and economic crisis, do you really think that this is the end?"

"I would not say that it would be the end of the world, but the entire financial system will have to reboot. All financial pyramids are artificial, and they all fall apart some day - one should not think of it as a natural phenomenon.

"Despite the efforts of many central banks, we have recently seen a number of crises. In 2008, the financial world shuddered at the artificial inflation of the bubble in the stock markets. Then the crisis struck the United States because of the bubble in mortgage construction. All this comes from the greed of monetary authorities.

"When people believe that the movement of stock prices depends on the economic situation, this is nothing but general misconception. Stock market is not related to real economy. Unfortunately, stock market is detached from the real situation in economy.

"The euphoria that we can see today on the stock markets happens just because stock traders, speculators and big money funds do not know where to invest their money. They do not opt for real economy, no matter what the authorities might do. At first, they went to risk-free assets, having inflated a bubble there. They were forced to buy the monetary authorities, central banks that is, they lowered rates and created a sea of ​​liquidity. The money did not go to real economy either, but was instead used on the debt market, with fixed-income bonds. Yet, the yield on reliable tools is negative everywhere now, whether they are German bonds or any type of other bonds.

"Greece is an exception, but still, the current situation in Greece is worse than it was in 2008. Forty percent of Greece's problematic assets are in the financial sector, so another wave of the crisis will hit the country sooner or later. Yet, Greek bonds sell like hot cakes, because they still bring profit.

"No one pays any attention to rating agencies anymore. Russia does not have an investment rating, but non-residents buy most of the placements of our Ministry of Finance, although foreign investors are not allowed to keep Russian securities in their portfolio. Still, no one can prohibit private-run funds from investing in the areas where they see profit.

"Cyprus currently holds 40 percent of non-performing bank loans, the situation in Greece is the same. Italy holds 350 billion of toxic assets on balance sheets, but it is only 16 percent. In China, according to preliminary estimates, there are up to $2 trillion of toxic assets and bad loans.

"The system of crediting in China has turned out worse than it was in Russia during 2006-2007, when every other Russian citizen had two loans to handle. The more credits bank give, the more chances they have to become problematic. China sets new records in lending now.

"The primary cause for all of this is primitive human greed. No one can make you buy worthless things at huge prices. Yet, hedge funds managers take up these risks in a hope to go through. People take risks because of the greed, and greedy people may often forget about their risks."

"The real risk management system does not exist anywhere. All central banks of the world have been following financial risks for the last five-seven years. All central banks have embarked on a currency war, because any large economy can survive only with the help of cheap currency. Cheaper currency makes goods more competitive. China received the status of a reserve currency at the end of last year, and as soon as it happened, China started devaluing the yuan, having thus joined the currency war too.

"In 2008, the USA launched the printing press to devalue the US dollar to make US products competitive. This is what China and Japan have been doing lately too.

"I have recently talked to a friend of mine, who has been living in the USA for eight months. He has been to nine states, and he told me that the real state of affairs in the US economy is not reflected in official reports. He said that people may look for a job there for months. The real level of unemployment in the USA is over ten percent instead of the official five percent. In Europe, the situation is not better either. Russia is no exception."

"Does it all mean that the authorities of many countries need a little victorious war?"

"Well, this is the best way to write off debts, and we can see it from world history. The USA has $19 trillion of debt, and Europe's debt is just as large. Japan holds almost 400 percent of GDP in public debt. China, unlike other countries, has free reserves, but the country has its own problems to deal with."