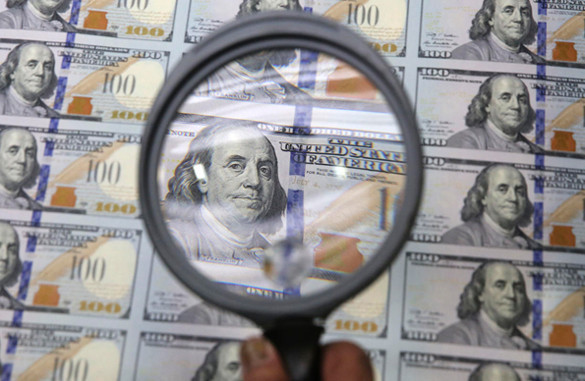 The wall street "algos" (computer algorithms) hadn't been programmed for that because it was considered to be like a law of nature that US Treasury bond swap spreads could never be lower than the actual interest rates being paid by US Treasury bonds.

Unless. The US government would soon be either bankrupt or no longer in existence.

Beginning in the Fall of 2008, the consensus of bankers and hedge fund vultures came to be that the US government will be bankrupt before 2039 or no longer in existence sometime before the year 2039. An interest rate swap spread is the difference in swapping floating rate (variable rate) interest to a fixed rate of interest. Interest swap spreads are similar to credit default swap spreads, which are easier for many people to understand first before understanding interest swaps.

In September 2015, the US Treasury 10 year bond swap spread went negative, becoming lower than the actual yield of the US Treasury 10 year bond. The consensus of bankers and hedge fund vultures is now that the US government will be either bankrupt (unable to pay it's bills and unable to borrow any more money) by 2025 or the US government will no longer be in existence by the year 2025.

Inherent in the figures and timeline are probable events in the immediate future in the USA such as short-term deflation and more "quantitative easing" (i.e. the US Treasury printing trillions of more dollars out of thin air) followed by hyper-inflation and a worthless US dollar.

More importantly, world leaders and other important decision makers need to plan for a probable contingency that by New Year's Eve 2023, there will be a bankrupt US government. Or no more US government. The weapons stockpile (e.g. nuclear, chemical and biological) that exists in the USA makes good planning for this probable contingency a compelling imperative for the human race.