The Nicaragua Canal: A Step towards development

Manágua, the capital, and the whole country celebrate the fulfillment of a century-old yearning: the building of a work that promises to become a valuable trade and communication route, in addition to giving a major boost to the development of this nation. In December the construction works for the Grand Canal began. 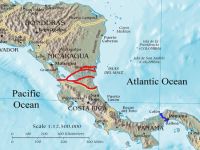 Managua (Prensa Latina) For Nicaragua, December is the month of great events and this 2014, for many, will be remembered in the history of the country and the world: the expected Christmas festivities accompanied the start of construction of the "Grand Canal".

42 years ago, in the last days of 1972 Managua was devastated by an earthquake of 6.2 magnitude on the Richter scale that caused the death of over 10,000 people and enormous material damage.

In contrast, four decades later, the capital and the whole country celebrate the fulfillment of a century-old yearning: the building of a work that promises to become a valuable trade and communication route, in addition to giving a major boost to the development of this nation.

For President Daniel Ortega, the project meets the aspirations of the Nicaraguan hero Agusto Cesar Sandino and is an achievement for Latin America and the world.

In 1929, the General of Free Men considered the channel as a route which would be "both the magnet and the key to the world" and would be a wonderful valve for material and spiritual development.

Almost a century later, Nicaraguans see a dream likely to come true and are able to bet on a work whose scope goes beyond national borders.

In the morning of December 22 last, Wang Jing, president of HKND, Chinese concessionaire of the project company, announced the start of construction of this structure over a ceremony held in the southern department of Rivas.

"I invite you to put in your memory this great moment that will surely go down in history," he said.

That same day, in another ceremony held in "Casa de los Pueblos," in the Capital, Ortega assured: it is no coincidence that this work develops when in our America we have been able to take a historic leap for integration and unity.

"The summit of the Community of Latin American and Caribbean States, will have the opportunity to make known that with the Grand Canal began to be reality in Nicaragua the ultimate dream of (Simón) Bolívar presented by (Augustus Caesar) Sandino," he said.

In the centenary year of the Interoceanic via in Panama, the beginning of a similar work resumes old hopes, however it creates new challenges and draws attention from around the world.

The length of the Nicaraguan canal, whose route was announced in July, will be approximately 278 km, including a stretch of 105 will be at the Cocibolca lake.

It will pass through the River Brito in Rivas, about 100 kilometers from the capital, will cross the lake and circle around the River Tule to its mouth in Ponta Gorda.

Its total cost is valued at $ 50 billion and is expected to be completed in 2019.

Official reports indicate that it will take 5% of the transport of the entire world trade, double the GDP of Nicaragua and generate more than 250,000 jobs.

Apart from the canal, there will be an airport, several roads, an area of free trade, tourism complexes and two ports, one on the Pacific side and one on the Atlantic.

During the last two years, there has been an investment of around 200 million dollars in the project and, according to HKND, it has a comprehensive plan, which includes the evaluation of relevant departments and operations to be quoted on the Stock Exchange.

On the other hand, it was decided to increase the costs of feasibility studies and the resources allocated to them in order to ensure greater protection of the environment.

According to Wang Jing, the compensation of persons located in areas near the planned route will be based on "Nicaraguan law, law of the market and human principles."

The citizens of this area will be able to choose between monetary compensation, exchange of their land for others or their transfer to new housing.

"All this will be done through face to face friendly negotiations. Their existing rights and standards for conducting the best choice will be explained to them," he said.

The work plan designed by HKND for 2015 contemplates the continuity of the measure and acquisition of properties in the territories near the route during the first quarter.

Furthermore, access roads will be constructed and bidding will start for the preliminary design of the structure.

During this period, a study on the environmental impact of the work will be completed and presented and then there will be the beginning of the excavations.

In the fourth quarter, the procurement and design of the locks will be performed.

"There is still much to be done and many challenges to overcome, but there is no turning back. We will devote all our wisdom and value to fulfill this historic task (...). We have come to bring wealth and dignity and to leave behind poverty and backwardness," the Chinese businessman stated.

For the main project advisor, Bill Wild, this is a challenge to engineering, in particular for the superior size to existing similar projects.

According to analysts, the main challenges are related to the scales of the structures in addition to the climatic conditions of Nicaragua and the constant occurrence of earthquakes.

Nevertheless, HKND ensured that were conducted "surveys, drawings and fruitful and effective investigations, establishing a sound basis" for its construction.

A copy for development

Last October, President Daniel Ortega highlighted the importance of said work as a means to address the poverty and spur development of this nation.

"This is the only way for Nicaragua, in the present circumstances, to be able to use a resource that gives the tools to advance in the fight against poverty, (and) qualify productive activities," he said.

In turn, Telemachus Talavera, president of the National Council of Universities, pointed out that the canal is a means for human development and bringing in the people of the world.

It is a monumental work. It will transform Nicaraguan society and will influence in a significant way in the Latin American and Caribbean unity. 2015 will be marked by the course to take this project, Jacinto Suarez, International Relations Secretary of the Sandinista National Liberation Front told Prensa Latina.

With the sound of machinery in Rivas beginning this December ancillary work such as construction or expansion of roads and the port Brito, started to become reality in Nicaragua... the aspirations of centuries... and opened enormous opportunities for economic and social development not only for this nation, but also the world. http://www.patrialatina.com.br/editorias.php?idprog=d51f8f228dbea3e6f3e6421385707f68&cod=14904