The Yo-Mobile project of Russian entrepreneur Mikhail Prokhorov, which he announced back in 2010, has been actually closed. Company Yo-Engineering handed over all documentation and rights for the development of the body and chassis of the vehicle to FGUP NAMI (federal state unitary enterprise). Prokhorov closed the deal for the symbolic amount of one euro. One is left to wonder what reasons are hidden behind such a deal. 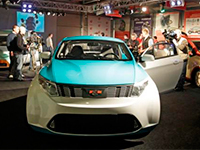 The project of Russia's first-ever hybrid vehicle Yo-Mobile equipped with gas and petrol engine and electric transmission laid the foundation for the establishment of  joint venture Yo-Auto. In the company, Prokhorov's ONEXIM Group owned 51 percent. It was originally planned to build about 20,000 cars a year. Moreover, the number of preliminary orders for the purchase of the Yo-Mobile was above the plan. Yet, the plan failed to realize.

" As I see it, the biggest reason here is an economic one. Starting automobile production from scratch, with no history of production in general is very hard, - chief editor of News of Automobile Business Magazine, Roman Gulyaev told Pravda.Ru. - The second reason as I think is that Prokhorov chose not the right partners for this venture ... Actually, his partner in this business was quite a decent, ambitious, but, in my opinion, not quite experienced company in terms of production. The company has built several trucks before and has done nothing special from the standpoint of production."

"I think that the reformatting of the Yo-Mobile project is primarily due to the fact that economy is having hard times now, as I think. And the fate of Yo-Mobile is primarily concerned with this, rather than project-mongering of the initiator of the project, or other factors, journalist, member of the Writers' Union of Russia and the Union of Cinematographers of Russia Yury Geiko told Pravda.Ru. - I think that with a change in not only economic but also political situation, which resulted in changes in economy, people realize what there is ahead of them. First and foremost, it goes about the sanctions in connection with the issue of the Crimea. People understand that there may be hard times for Russia ahead. Everyone understands that - from common people to businessmen and CEOs of automobile companies."

It is worth noting that representatives of the company that initiated the Yo-Mobile project, Mikhail Prokhorov's ONEXIM Group, noted that the move was primarily based on economic reasons. The decision to give the project to the state is connected with the fact that against the backdrop of declining demand, the efficiency of the project became not obvious. As a result, Prokhorov, whose managers have already collected more than 200,000 pre-orders, finally decided to hand over the technology of the project that he kicked off with fanfare a few years ago to the State Research Automobile and Engine Institute (NAMI), practically free of charge. One euro is not a fee.

In general, all experts, who deal with the Russian car market, believe that implementing the project profitably for the production of the vehicle on the stated conditions had become impossible. According to Kommersant, this is presumably connected with increased costs as a result of the growing euro rate, which led to the increase of the final price of the car.

Experts of Yo-Auto explained the move to deliver the project to NAMI. As it turns out, patriotic considerations play a significant role here. The technology delivered to  this well-known domestic organization may then be widely used in further developments of both domestic passenger, freight and public transport.

Along with the technology, it was decided to sell the production facility for Yo-Mobile, the construction of which had started in St. Petersburg, for serious money, though. This production already has all necessary infrastructure, although it lacks production lines. But still, this is not going to be sold for one euro.

The ambitious, yet quite pragmatic businessman Mikhail Prokhorov had been trying to realize his idea in practice for four years. The press would refer to the project as "people's car." The project received media attention back in early 2010. Despite the funny  name of the project, it attracted serious business interest. In December 2010, Prokhorov introduced three models of the hybrid car at once: a hatchback, a van and a cross-coupe.

A little later, they started to take pre-orders for the vehicle online. The car was going to be sold at quite a reasonable, "people's price" - 350-450 thousand rubles ($10-11,5K, depending on the version). Serial production at the plant in St. Petersburg was supposed to be launched at the end of 2012. However, when the time to produce the car came, it turned out that "something went wrong." The real serial production of the Yo-Mobile was pushed back to late 2014 or early 2015. The delay was explained with alleged problems with a U.S. contractor for the production of the body of the car.

In general, there is no policy there really - there is only pure economics. In the current economic situation, amid the sharp weakening of automotive market conditions, implementing the project of the Yo-Mobile on the previously announced terms, to receive profit, became impossible. No one will buy an original car if it costs a million rubles or more. However, one can find connections with political events in the story still.

It turns out that the party that Mikhail Prokhorov founded - Civil Platform - does not consider the project of the hybrid car a failure, Prokhorov's party secretary said. The businessman quit business even before the Duma elections in 2011 in accordance with the law, and all ONEXIM's project are not supposed to be related to him directly. Well, it would have been a remarkable PR stunt: Yo-Mobile sounds great, no matter what skeptics may say.