The situation around the "South Stream" is getting increasingly tenser. While the EU is looking for leverage over Moscow in light of the developments in Ukraine and Crimea, Gazprom is confidently implementing its "South Stream" project, including land areas of individual EU countries. Of course, such self-confidence of the gas giant is adding fuel to the fire. 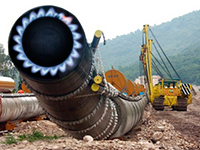 The European Union has issued numerous warnings about a potential termination of cooperation with Russia on "South Stream" gas pipeline. These statements are, of course, not particularly realistic because the European Union is too dependent on Russian gas, but we should not forget that Gazprom has quite notable competitors in North Africa, Iran and Azerbaijan. The volume of supply from these countries cannot be compared with the Russian gas giant, however, winter is coming to an end. This was mentioned by the European Commissioner for Energy Gunther Oettinger who stated the possibility of postponing the talks on the gas pipeline (it is tempting to add here "until the next cold season").

However, the Europeans have long been thinking about getting gas of non-Russian origin. They are considering three projects, Trans Adriatic Pipeline (TAP), Interconnector on the path Turkey-Greece-Italy (ITGI), and Nabucco. The latter project scheduled to transport gas from Turkmenistan and Azerbaijan was frozen on June 28, 2013, after which the Trans-Adriatic Pipeline became the priority. ITGI was also doomed to failure because Shah Deniz consortium rejected the possibility of Azerbaijani gas supply to this artery.

As a result, now the only real competitor to Gazprom is TAP project. Likely, it is a future competitor, because now the project is suspended in anticipation of the completion of the future Trans-Anatolian gas pipeline (TANAP) and the development of Shah - Deniz-2. The cost of the second part of the project for development of the Azerbaijani Shah Deniz field is estimated at $25 billion. The first extraction of gas is planned for 2018. This means that in four years the EU's goal to reduce its dependence on Russian gas may be met, but not now.

"The European Union, and especially its Energy Commissioner, has been trying to hinder the construction of the "South Stream," and used various permissible and at times illegal methods. Of course, now, in light of the Ukrainian events they have an excuse," president of the Union of Oil and Gas of Russia Gennady Schmal shared his opinion with a reporter of Pravda.Ru.   "I believe that we have basically started this work, there is an agreement with many countries that are ready to consume the gas, so, of course, they can try to stop it, but really they cannot prohibit us to build it. We are not going to ask their permission, especially when it comes to our territory. So far we are building across the Black Sea and we are on the territory of Turkey that is not part of the EU, so what can they do? I think, of course, they can cause us frustration, but they are unlikely to significantly impact the situation."

Another thing is the actions of the countries through whose territory "South Stream" will go, namely, Bulgaria, Serbia, Hungary, Greece, Slovenia, Croatia and Austria. For example, Bulgaria and Serbia, where Gazprom has already begun the "South Stream" work, are pressured by the European Commission. On Tuesday, former Bulgarian President Georgi Parvanov told Bulgarian media in light of Oettinger's warning to freeze implementation of the "South Stream" that nobody entitled the commissioner to negotiate on behalf of the countries along the route of the new gas artery.

Earlier, the decision not to interrupt the preparatory work for the construction of the gas pipeline "South Stream" on its territory, according to Reuters, was announced by the Bulgarian Prime Minister Plamen Oresharski.

"There are two levels of government in Europe. There is a national level, and there is the EU level, the European Commission, the European Parliament," said director of the National Energy Institute Sergey Pravosudov. "Now the problem is that individual governments are engaged in interstate relations, including in the energy sector. The European Commission is working to actively ensure that these powers are transferred to it so it serves as a single representative of the entire Europe. They think that it will improve their situation. It will enable a competition between countries, they will play the countries against each other and seek more advantageous conditions.

They are not entirely successful because the countries do not want to give away these powers, knowing that it is important for them. The countries argue that the relations within the European Union are governed at the level of the EU, and they are trying to adjust their regulations anyway and bring them in line with the European Union legislation. The "South Stream" agreement was signed with individual countries. The European Commission is trying to get into the process saying that these countries will still have to act according to the norms of European law, so why not introduce European legislation right away."

The expert stressed that Ukraine is obviously an unreliable partner for the EU, therefore the question of bypass routes for the pipeline is very acute for everyone. This means that accelerated construction of the "South Stream" gas pipeline is beneficial not only for Russia, but for the entire European Union. That is, currently the European Commission should be basing its actions solely on economic interests, without mixing in the political games where it was lured by the Ukrainian campaign. Meanwhile, good news about the project came from Gazprom CEO Alexei Miller. According to him, the operator of the underwater part of the "South Stream" project, South Stream Transport BV, is ready to sign a contract for laying the first leg of the artery and supply of pipes for its second leg in later March. While some are entertaining threats, gasification process continues bypassing Ukraine.