Russia's Transport Ministry is finalizing a bill that will set a path for low cost airlines. The Government Commission on legislative activities has approved the document on non-refundable tickets enabling air fare cost reduction. In the summer Russians will be able to buy non-refundable "economy" class tickets. 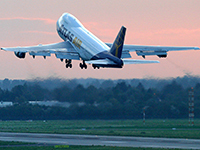 Cheap flights are a worldwide practice that has not been adopted in Russia. Europeans and Americans have been long opting out of extra services, such as meals during short distance flights and luggage transportation to save on tickets. For example, in Europe one can buy a plane ticket for only 30 euros, or even 10-15 euros during a sales campaign (the cheapest low cost airline in Europe is Ryanair). To Russians these prices may seem unrealistic because flights even within Russia are quite expensive.

All low cost airlines that emerged on the Russian market have quickly gone out of business. We tried to find out the reasons from the experts.

"The low cost airlines that emerged in the market made some economic mistakes, like in the story with Sky Express and Avianova. They, unfortunately, have ceased to operate a few years ago," told Pravda.Ru Vice President of the Association of Tour Operators of Russia, an expert on transportation Dmitry Gorin. "They may have hit the market too early, not in terms of the demand (cheap transportation is always in demand), but in terms of the lack of the economic model. Their business model was erroneous. They were not cost-effective for shareholders, so these companies have ceased their activities. "

The expert said that there were cheap flight tickets in Russia sold by major airlines. For example, "Transaero" and "Aeroflot" have discount tariffs.

"The rate is almost as low as that of a low cost airline, about 3 thousand rubles per ticket to destinations where other tickets are more expensive. In the spring a classic low cost airline Dobrolet will enter the Russian market. The plans are very serious, they want to get 45 aircraft, will begin with two aircraft, and the company will continue to grow. Tickets will be sold both on line and by travel agents. Hopefully the price for these options will be at least 20 - 40 percent lower than other tickets."

Dobrolet should not be considered a classic low cost airline similar to those in Europe and the United States because it is a subsidiary of Russia's largest carrier, Aeroflot, that is not going to leave the premium segment. As head of analytical department of the Airport agency Oleg Panteleev explained to a correspondent of Pravda.ru, the launch of Dobrolet is directly linked to the changes in the regulatory decree lawmakers are now working on.

"These changes should enable airlines to reduce the level of costs, and share part of these savings with the passengers and thus offer customers more attractive fares," Panteleev said. "Perhaps we cannot say that the implementation of the low cost airline business model would be impossible without this package of regulatory changes. Likely, the key factor here is economies of scale, that is, if the carrier serves tens of millions of passengers a year, its fixed costs are spread over a very large number of customers and their impact on the amount of costs and partially pressure on the tariff is reduced. "

The expert believes that it is premature to expect a quick entry of low cost airlines into the Russian market, and it is better to wait until the document is adopted. Obstacles for the Russian low cost airlines segment include insufficient number of airports in the country, and poor electronic and technical infrastructure that helps foreign airlines to save on staff. Another reason is high demands of the Russians who use airlines and expect the best service.

The preferences of the Russians may change if they are offered an alternative to high-priced tickets, guaranteeing a comfortable flight, in the form of non-refundable cheap tickets from low cost airlines. Maybe then the number of air passengers in Russia will approach the number of American and European passengers.

"Today, the entire civil aviation in Russia carries fewer passengers than the major airlines, say, in the U.S. or the EU, it is absolutely comparable, it is the same scale," said Oleg Panteleyev. He added that the crucial issue for the development of low cost carriers is constant improvement of the regulatory framework and implementation of the most advanced technologies by the airlines, which would increase their competitiveness in comparison with foreign colleagues.