Rostov producers unite under Made on the Don umbrella brand 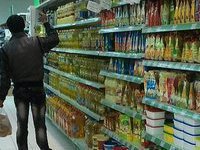 "Made on the Don" - this umbrella brand may soon embrace a whole range of food producers of the Rostov region. This will allow local businesses not only to defend the regional niche for their products, but also to create conditions for entering the markets of the Customs Union.

One of the initiators of this idea, Rostov Region Governor Vasily Golubev, became engaged in the support for quality control of Rostov products. The governor proposed to establish a regional system of voluntary certification of food producers in the region.

The State Regional Center of Standardization, Metrology and Testing in the Rostov region will perform the functions of the certifying authority; an adequate agreement has been signed with the organization.

Today, all-Russian brands, which are often owned by major multinational corporations, dominate the food market of the Rostov region. Such food monsters as Danone, Nestle and PepsiCo may retain regional brands as they are recognizable on a particular territory.

For local independent producers that can not compete with transnational corporations in terms of financial capabilities, it becomes increasingly difficult to bring their products to food stores that are already filled with 5-6 brands of similar products, of which at least a half of them belongs to the collection of a widely recognized brand.

"The main issues with small local producers are the ability to develop an export network and the branding of their product. Of course we could find some case where a small individual producer, with a product with a strong brand could get even against larger ones. However, more frequently than not the cost of developing its export network and branding the product could be enough to deter the producer of exporting and transforming it, slowly but surely into a kind of sub-contractor for a larger firm. in this context, association of producers, but also some kind of collective branding (like European AOC or "appelation d'origine contrôlée"), could be of a tremendous help. This kind of local producers association could, for given products, enable producers to gain significant foothold on export markets or to defend their position on the internal market," said Jacques Sapir, director of research at School of Social Sciences , a specialist on the Russian economy, told Pravda.Ru.

Therefore, local producers unite under one "umbrella" that will allow them to save on advertising and bring their products to market under one brand name to defend their market share. This technology is efficient only if products represent  one segment or product category.

Creating "Made on the Don" umbrella brand will give local producers an opportunity to step aside from the products of large corporations, playing on regional patriotism.

"People want simple and clear images, crisp and clear messages, reliable information. The Don as the region is perceived positively. For people in many major cities, this region is primarily associated with endless fields of gold wheat... in short, an eco-friendly, beautiful place. People believe that crops and better, and the air is cleaner there, - said General Director of Evrodon agricultural complex, Vadim Vaneev. - We understand that it is each and everyone of us, who builds the reputation of the region - all local residents, the government, businesses and the media. We are willing to work so that our brand becomes one of the components of the reputation of "Made on the Don" brand.

Creating a new brand will not only increase awareness of local foodstuffs among regional residents, which will have a positive impact on sales volumes, but will also increase supplies to other regions and countries, as voluntary product certification requires manufacturers' compliance to the rules of the WTO and the Customs Union.

"The subject of the regional brand of the Rostov region is not new. We have, for example, a contest called "Tope Hundred Best Goods of the Don," which is a guarantee of quality and positions the goods as products manufactured in our region, - the director of the Department of Consumer Market of the Rostov region, Andrey Ivanov said. - The winners gladly put the contest logo on their packaging, it boosts sales. "Made on the Don" is a logical continuation of this."

In the Rostov region, there are companies that managed to step with their products outside the region and win all-Russian recognition. They are such brands as "Taurus", "Vepoz", "On the Meadow", "Golden seed." In all likelihood, they do not particularly require the additional marking of "Made on the Don," although the participation of these producers in the marketing plan would promote other products manufactured under this regional brand.

The quality of products should be given special attention, as the failure of only one brand of the "Made on the Don" umbrella will have a negative impact on all other producers.

It is quite likely that one will have to modify the name of the umbrella brand. The Don River flows on five regions of the country, which in the future may create opportunities for legal attacks over the privatization of the non-privatizable geographical name.