In an anticipation of the war in Syria, the global oil market starts to shiver. A barrel of oil has recently jumped up to $115, which, according to experts, is not a limit. Some analysts give quite gloomy forecasts. They authoritatively declare that the world is standing on the verge of gasoline apocalypse. 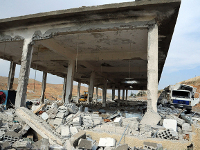 In the Russian part of the Internet, there is a very popular forecast from U.S. expert Brandon Smith, who considers Syria a spring board for apocalypse that has been planned by the US establishment. His list of 20 looming, pretty grim events, includes those associated with the cost of oil.

According to Smith, in response to U.S. actions against Syria, Iran can close the Strait of Hormuz by sinking several cargo ships at its narrowest point. Such an act would immediately cut the volume of oil transportation by 20 percent. At the same time, the Egyptian Suez Canal will become highly dangerous to navigation too. Oil tankers will thus have to go around the Horn of Africa, increasing the length of the route by two weeks and significantly raising the cost of transportation.

The inevitable export of instability, the experts believes, will trigger a social conflict in Saudi Arabia. As a result, prices on gasoline will increase significantly. Smith predicts a rise in 75-100 percent during two or three months after any type of attack on Syria.

Sounds scary. Brandon Smith is a professional survivalist. His business is to organize local communities to create a network of mutual aid and barter across the United States. Looks very apocalyptic already. Yet, Smith gives his predictions quite accurately.

Less exalted experts agree with Smith's arguments, at least partially. Indeed, Syria does not affect the oil market directly. The peak of oil production in the country was registered about 15 years ago. Since 2011, the export of hydrocarbons has been virtually stopped - the country consumes all it makes. To crown it all, Syria is dangerously close to major oil transportation routes.

The risk for oil transportation routes explains surging oil prices on stock exchanges. Investkafe analyst Gregory Brig predicts further growth of quotations of up to 120-125 dollars per barrel. Some economists believe that the price will reach $150. However, such a rise prices is only possible if the Syrian conflict escalates into a more substantial one, with the participation of other countries in the Middle East, and if the Strait of Hormuz is eventually blocked.

"Syria is not a key player on the oil market. Rather, the market fears destabilization of the geopolitical situation in the Middle East. If Syria accounts for about 2/10 of the world's oil production, the Middle East accounts for 30 percent. Many are concerned that other countries will be involved in the conflict - Iran, Egypt and others. Therefore, prices will rise," said the analyst.

Against the background of the current situation, a rise by 75-100 percent is out of the question, of course. First and foremost, such rapid growth will kill all possible production everywhere - the world economy will not survive. Even the current growth in prices creates serious problems. The majority of experts, recalling 2008, are confident that after a short way up, the oil market will face a serious pullback. Before the crisis of 2008, a barrel of oils cost $147.3, but by the end of the year the price dropped to $35.

Nowadays, experts say, prices will most likely return to the level of one hundred dollars. Despite the version of giant oil reserves found in Syria (about 37 billion tons), which could derail the prices, it most likely goes about shale oil deposits on the shelf. In addition, the Syrian oil is classified as heavy hydrocarbons (like the Russian Urals). Who would want to arrange a small victorious war to get such dubious benefits? The game is not worth the candle, because these huge reserves would have little effect on reducing the cost of oil.

Anyway, as history shows, the actions of the United States in oil-rich regions only lead to complications. This was the case in Libya, where the richest deposit on the African continent is located. A member of Libya's Parliamentary Committee on Energy, Sliman Kajam said that the official production of black gold dropped to 150,000 barrels a day. Prior to the "democratization" of Libya, the daily production was evaluated at 1.5 - 1.7 million barrels a day.

In addition, the level of oil production in such countries as Saudi Arabia and Iraq are getting closer to their peak. In general, the current level of hydrocarbon prices adequately reflects the balance of supplies and production.

Higher oil prices will certainly bring more profit to Russia, but this money will be soaked in the blood of many Syrian citizens. According to many experts, the aggravation of the situation in Syria will make investors move their capitals from emerging markets to developed ones. The losses from the fall of the Russian stock market will outweigh benefits of the rising cost of oil.

Meanwhile, the head of the Duma Committee on Economic Policy, Igor Rudensky, told Pravda.Ru that the situation in Syria would hopefully be resolved peacefully. "Even if something happens, I do not think it will affect the global world oil market. Oil prices having been going up and down during the last five or six years. International events have their influence on the oil market, of course. If the European economy starts growing, for instance, the demand starts growing too, and oil prices rise. If the demand is falling, prices are falling too. Today, any talks about dramatic changes in oil prices are premature. Overall, the situation is quite stable. Now you can see what happens. Everyone says at the G20 summit that the world economy is slowing down, so one needs to look for a way out from the global crisis together. In my opinion, in the next few years, nothing extraordinary will happen."