The truth about the real size of the US national debt

Everyone got used to the largest officially announced U.S. national debt of 16 trillion dollars. Moreover, despite the dire predictions, the global economy seems to be more or less stable, and recently liberal media have been happily reporting GDP growth in the United States and the European Union. However, it is not all that great.

Let's start with statistics. A number of researchers have conducted studies that indicate that the official U.S. statistics in nearly all areas - from unemployment to price fluctuations - is blatantly distorted and paints a positive picture that is very different from the reality.

The work of Professor James Hamilton of the University of Economics, California who analyzed the size of the public debt of the United States particularly stands out. According to official data since 2008, when the global economic crisis commenced, the U.S. national debt has increased from 5 to 16.4 trillion dollars. The debt is repaid by ordinary taxpayers who pay approximately $220 billion annually in interest alone. 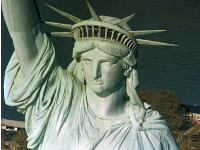 This huge sum emerged due to the fact that in an effort to get out of the crisis, the Federal Reserve in coordination with the U.S. authorities pumped money into the economy and bought a lot of assets. Accordingly, the amount of state debt increased every year, and the interest on the debt service alone by 2021 will exceed the costs of defense spending.

Given these figures, Professor Hamilton has calculated the value of the U.S. government debt that consists of the debts of individual states, corporations, individuals, government welfare payments and other obligations of the federal U.S. government to its creditors. The resulting figure is a staggering 70 trillion dollars. The U.S. lawmakers allowed debt ceiling of 16.4 trillion dollars that has been reached late last year, then U.S. Treasury Secretary Timothy Geithner informed Congress about the beginning of the suspension of debt repayments and emergency measures to avoid a default. If this research is only half true, it means that the U.S. is in a state of a default.

The fact that this assumption is not far from the truth is evidenced by the situation in American cities. Hundreds of cities are not able to pay their bills and fulfill social obligations. According to the World Bank, this may lead to their bankruptcy, putting the country on the brink of a sovereign default in the next three years.

As of August 1, 2013, 12 U.S. cities have declared themselves bankrupt and insolvent. Nearly 350 small and medium-sized cities in the country and 113 municipal districts of large cities, particularly New York, are close to doing that. In mid-July, the City Hall of the former automotive capital of the United States Detroit has filed for bankruptcy. The city's debt amounts to 18 billion, of which 9.2 billion are pensions and medical.

The overall deficit of the pension fund in the U.S. is $2.7 trillion, or 17 percent of GDP. The lack of money in the pension fund, for example, in Illinois is 2.5 times the amount of annual tax revenues, Connecticut - 1.9, Kentucky - 1.4 times.

The largest bankrupt city is currently Stockton, California, with 300,000 thousand residents. The situation in this city can show what will happen to other cities dealing with financial difficulties. The police department was cut by half, and the streets got filled with homeless, drug dealers and gangs of drunk teenagers. This year, 56 murders were recorded in the city, while in New York with the 15 million residents 414 such crimes were registered.

Meanwhile, Stockton, like another bankrupt city of San Bernardino, is located in the richest state of California. What can be said about other states when Los Angeles has a budget deficit of $238 million and prospects of a default in the next year?

Washington carefully conceals the information on the extent of the crisis in the country that followed the canons of monetarism. However, the information becomes known to the world, and the U.S. allies and partners are not happy because they know that the United States will emerge from the crisis in any way they can. They may be solving their problems at the expense of other countries, in particular Russia, as it has happened many times before, for example, in the case of placing Kudrin's oil and gas revenues in U.S. Treasury obligations

In light of this example the planned reduction in the exchange rate of the ruble announced by the Russian Minister of Finance early summer is not surprising. Empty dollars can be exchanged for even more rubles to buy quite tangible assets, including during the second phase of privatization that would help to close huge budget gaps. Likely there will be no problems in this fascinating process, as ardent liberals and adherents of the Chicago School of Economics and adepts of the U.S. sit in the economic block of the Russian government.