Russian economy to fall into abyss?

Experts are debating whether Russia's economy has slipped into a recession or whether it is "safely" stagnant. The difference between stagnation and recession is of insignificant technical nature. However, the dispute over the terminology also has a political dimension, and for that reason it was joined but such heavyweights as Alexei Ulyukayev, the Economic Development Minister, who argues that the economy is stagnating. 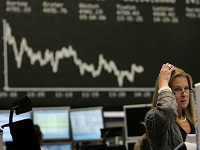 We can say with absolute certainty that the country's economy is gradually but steadily slowing down. This process has been ongoing since 2011 and it looks like this is the moment when the raw materials locomotive is on the verge of a full stop, or even a rollback.

Also on Friday, Deputy Economic Development Minister Andrei Klepach told Prime agency that the experts of the ministry were still hoping for a positive trend in the third quarter. He acknowledged that the information on preliminary estimate of economic growth in the second quarter published by Rosstat was worse than expected. In April, the Ministry expected growth of 2.1 percent in the second quarter.  The adjusted April forecast of the Ministry for GDP growth for the year was 2.4 compared to the previously projected 3.6 percent.

So far the Ministry is not revising its forecast for the third quarter that reflects the expected growth of 2.5 percent. But the weak dynamic of the previous months leaves little chance of achieving this result. According to some leading indicators, the economy is falling. PMI index of business activity published last week by HSBC dropped below 50 points, which is a sign of an economic downturn.

Late in the week an international research firm Capital Economics stated that based on the result of the first six months of the year, the Russian economy entered into a recession. Since there is no final data from Rosstat as of yet, we can assume that we will see a classic recession, that is, the decline in the economy for two consecutive quarters. There are no doubts that the Rosstat and economic institutions will put off the statement of this unpleasant fact for as long as possible. They understand better than anyone else that the slow growth due to the increase in oil prices and the growth of mining has been exhausted.

"There is no recession. There will be no recession. Stagnation is probably a better term. The growth rates are very low; this is an institutional, structural, macroeconomic factor. This is something we will have to deal with for a very long time," said Economic Development Minister Alexei Ulyukayev in an interview with Prime.

The official suggested a timely revision of the forecasts that would take into account the outlook for global growth and competitiveness of the Russian economy. Ulyukayev did not rule out the revision of "Strategy 2020." "Without major changes in the institutional environment it is difficult to count on the fact that we will grow much higher than the rest of the world on average," said the Minister.

Experts of Capital Economics confirm that weak GDP dynamics is associated with a fall in consumption and investment. Opportunities for maneuvers in the short term exist only at the level of monetary actions. For example, a reduction in the rate of inflation may have a positive impact on real incomes and increased consumer spending.

However, this option seems too abstract. The most important factor that provokes inflation is an increase of tariffs due to the policy of the natural monopolies that limit them only in words. The planned inflation for the year is 5.6 percent. Since the beginning of the year through August the inflation has reached 4.5 percent, which means that it is unlikely that it will be kept within the stated limits through the end of the year.

The growth of budget expenditures could extend positive statistics, but according to the treasury, the general budget expenditures have declined by 1.4 percent to 5.9 trillion rubles. The income plan has been implemented by 48.6 percent of the forecast for the year, which is also not a good indicator.