Russia and Cuba together forever

Russia and Cuba are preparing a joint energy project. Russia will provide a loan of 1.2 billion euros and help Cuba modernize four units of thermal power plants. Despite significant investments, Russia hopes to ultimately benefit from the project. The need to maintain the equipment will help to strengthen the long-term relations between the two countries. 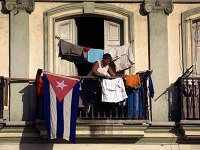 The preliminary agreement was reached during a February visit to Cuba of Prime Minister of Russia Dmitry Medvedev. It was then decided to place in Cuba four units with a total capacity of 800 MW, according to Izvestia.

The likely implementer of the project is "Inter RAO" - a Russian energy company with a wide range of activities. "Inter RAO" separated from RAO "UES of Russia" some time ago, and is engaged in the production and marketing of energy, international energy trading, engineering, design and construction of power facilities. In addition, the company controls a number of hydro and thermal power plants and energy companies abroad.

"Inter RAO" will install four combined power generating units with the capacity of 200 MW each in the cities of Mariel and Santa Cruz del Norte, but in fact it is a simple upgrade of the existing thermal power plants in Cuba. The company will not be building anything from scratch. Due to the scale and high cost of the project it will still be discussed over the next 18 months. Signing of the contract is scheduled for late 2014 - early 2015. The planned commencement of construction has not been reported. Representatives of "Inter RAO" confirm that the company is determined to implement the project. However, given that "Inter RAO" will not be investing its own funds, its determination in the absence of a feasibility study is easy to explain.

The power units installed by "Inter RAO" will run on Cuban and Qatari liquefied petroleum gas. This will be a novelty for Cuba because so far the country has been using only its own fuel to serve its thermal power plants.

The energy will be sold by a joint Russian-Cuban company. This will be an additional guarantee for the Russian side. However, in addition to a financial interest the Russian Federation also has a political interest, because at the moment Russia is interested in maintaining the existing and restoring lost connections that have been developed during the Soviet period.

"I have not seen the contractual part and do not know on what terms we are lending to Cuba, but I think that it is unlikely to be a gift," chairman of the State Duma Committee on Energy Ivan Grachev told Pravda.Ru. "Most likely, this is a credit decision. Can it be effective and provide a pay back? In my opinion - yes, because the named price (0.8 MW $1.2 billion) is a very good price. On average Russian power units are built at twice this price. This means this is a good project, and construction will likely be without much trouble, without much theft. Consequently, there are good chances of a good return on it."

Ivan Grachev also noted that from a strategic point of view, in any case, Russia is and will be in the future a major supplier of electricity, and under a good scenario, of power equipment for the world. He assured that he is convinced that not only oil and gas but also electricity should be exported. "For example, we will deliver it across Asia, this market will expand," said Grachev.

"It is clear that it would be better if it is produced at Russian facilities. Accordingly, if this order assumes (and I think it does) that the equipment is made by Russian plants, it is a strategically correct decision. Of course, I would support it. "