Iran will control operation of the Bushehr nuclear power plant

The Director of the Atomic Energy Organization of Iran (AEOI), Fereydun Abasi, has reported the preliminary launch of the Bushehr nuclear plant (in southern Iran) in the near future.

The Persian senior official said that after several tests were done at the plant, Iranian experts will implement the project with preliminary operations starting between January and February of next year.

This month, the mission of the Russian contractor in charge of and responsible for the construction of the Bushehr plant concluded, and is handing over control of the facility, Abasi added.  Therefore it is necessary to prepare the conditions for the development of the plant.

Abasi said that the Bushehr plant will generate from 4,000 to 6,000 megawatts of electricity, therefore it is necessary to provide the necessary infrastructure for the formation of human resources, as well as training and research for the power plant.

In 1975, the German consortium Kraftwerk Union began construction of the Bushehr plant, but was paralyzed after the Islamic Revolution in Iran in 1979, the Iran-Iraq War and by heavy U.S. pressure.

Subsequently, in 1995, Iran and Russia signed an agreement under which the said plant would be completed in 1999. However, the project was delayed several times until last September 12, 2011, when it was officially launched.

Financial problems, inflation, and the need to integrate German and Russian technology made the project difficult for participants.  The constituent parts have also different origins: 24% of the parts are German in origin, 36% are Iranian-made while 40% are Russian-made.

The Bushehr plant will satisfy about 2% of Iran's projected electricity consumption.  The Bushehr nuclear power plant is under the full supervision of the International Atomic Energy Agency (IAEA). 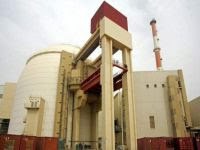